HOT IN CLEVELAND: A REVIEW 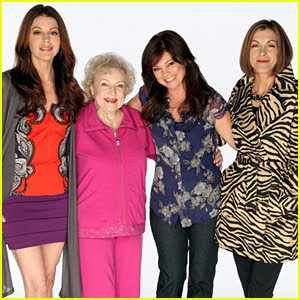 Airing at 10 pm on Wednesday nights- I think I found my new favorite show, the Sean Hayes-produced Hot in Cleveland. In case you have your head in a rock and missed the massive publicity circuit this week, the show is a traditional half-hour long sitcom that, as billed in the beginning, is taped in front of a "live studio audience." When I heard these words, my heart seriously skipped a beat. We're back to the old school, friends! There's a laugh track! and it's supposed to be real! sigh. TV nerddom moment, commence.

It's like this generation's answer to the Golden Girls- four LAYDEEZ that you don't normally see being catered to on television (but we're on cable! so anything can happen!) are living together and battling...um, life....together. AND BETTY WHITE IS ON IT. BETTY. WEARING TRACKSUITS.
All our leading women come from respective comedy TV backgrounds. Valerie Bertinelli of - my god, I don't even know WHAT she did anymore, just that she was married to Eddie Van Halen and lost a bunch of weight, Wendie Malick who is such an underrated gem of an actress and made Just Shoot Me watchable with her character Nina, and Jane Leeves of Frasier fame who is doing something again which makes me extraordinarily happy! so, on paper, this looks to be a winning formula. but we all know, winning formulas can (and often) tank when put into practice in real life. Crystal Pepsi, anyone? NEW COKE?
Well, in all fairness, what we have so far is a pilot. And you have to be gentle with pilots because it's hard to do them. really! I've written a few sitcom series for my own personal benefit (weird I know I need a support group) and the first show is always the hardest to write. thus, I try not to be too critical. but really- there wasn't so much to be critical of! Hot in Cleveland is a good show, thus far! The writing's spot-on and the women work up enough chemistry as lifelong friends and then there's just Betty White who is always wonderful, heart you gurrrrl.
The plot goes as follows: three women from Los Angeles are on a flight to Paris, where Bertinelli's character wants to go as she wrote some new-agey love-yourselfy books that are like OH YOU NEED TO DO THIS AND THIS AND OH THAT BEFORE YOU DIE. En route to Paris, the plane encounters problems and makes an emergency stop in.....of all dreadful places....

so the women, on their downtime, decide to go to a nearby bar where (they are surprised to find but I'm not! Jane Leeves will always be gorgeous!) MEN FIND THEM ATTRACTIVE. Long story short: they move to Cleveland. wherein, they rent a house that Betty White comes along with. SEE, NOW I JUST TIED ALL THE STRINGS TOGETHER!

By the way, I feel like I am a local expert on this, hailing from Erie which is two hours east of Cleveland and can tell you this is true. I have been to nicer bars in bigger cities and where I have had some guys be all "hayyyy" in these places, it's when I'm in Erie and Edinboro, where standards are very low, that I'm catnip. so! this is scientifically accurate! Sean Hayes did his research!

Bertinelli's character is the heart of the show; I can't give you much of a read on her other than that she's the one group member that watches Sleepless In Seattle on repeat and is going through a divorce.
she's the one, and I suppose all groups have these, that thinks because a guy takes you home and you wake up in his Cleveland Indians (best baseball team ever!) t-shirt that he is da 1. she's extremely likeable- there just isn't enough depth to her. yet.

Wendie Malick plays the self-absorbed, extremely vain aging actress of the group and is also given the best lines that are not given to Betty White. Some of the lines are dull but she's Wendie Malick. this woman could play Anne Frank and make me laugh.

Jane Leeves is also very good, as the career-obsessed one (always has to be at least one!) she's given some great material (a scene involving French fry grease comes to mind) and mostly functions as a side player for now, but. I'm too much of a Frasier fan. I keep thinking "DAPHNE? DAPHNE?"

you can watch the pilot on the TV Land website- the first episode is extremely rewarding, a little predictable, not anything cutting-edge, but it sure is entertaining and enjoyable. and I can see this group of LAYDEEZ (sry) becoming one of those united clusters in which viewers cling to, i.e. Friends and Golden Girls.

my big fear for a while was that this show would not last long, because sometimes I like a show right off the bat and it's gone within weeks. however, I think, seeing as it drew in TV Land's biggest ratings everrr and that it's on cable and not network TV, this show really stands a chance. be still my heart!

Hot In Cleveland might not make you melt, but it's just getting warmed up. (pun) I give it a B+

and also, show writers: HAVE THEM DO AN ERIE EPISODE. THE LOCALS WOULDN'T KNOW WHAT TO DO WITH THEMSELVES.