how a crowd can ruin a concert: SHE AND HIM

June 11, 2010
I was beyond excited for this show. waiting in the line with the row of fake Zooeys, I had to stop and close my eyes and adjust myself for a few times to realize I was seeing a girl that I've basically built an altar to in my mind for the past year. ZOOOOOOOOOOOOOOOOEY. I feel like this post should just be photospam, really. who cares what I have to say in the wake of such event! I saw ZOOEY IN THE FLESH! my grandchildren will know about this! 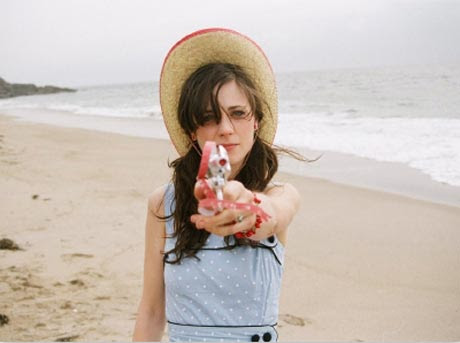 what followed was :/. She & Him were good, captivating, energetic- but the audience was limpid. the audience sucked the soul out this show with their pointed little American Apparel-draped teeth. that's a tad bit too dramatic I guess- the audience got a little more bearable as the night went on. but still. I've never had a group of people ruin such an event for me. reallllllly! like, how do you NOT sing along to "Home" or "Ridin' In My Car?" Jesus. People are so weird sometimes!

The show was sold out, for starters. and it was hottttt. and someone by me smelled like a garbage can. plus like- Zooey's style is totally adorable and cool and unique but it's something that's HERS. and all these Zooey clones! MY GOD! sometimes it worked but mostly it did not. I rolled my eyes quite a lot that night. I mean, I did try and make my now-grown-out bangs more prominent, but that was about the extent of it. I wore plaid to try and channel Matt Ward, tho.

The Chapin Sisters opened and started out pretty strong, a capella. those girls have some voices! seriously, think of the O Brother Where Art Thou soundtrack and then channel it through School of Seven Bells. yeah, they definitely deserve your time. check this out:

as always, openers seem to get no respect, so there was a lot of chatter through their powerful, intimate and strongly folk-ridden performance. the one sister (both so beautiful btw! so beautiful!) then gave an OBERLIN ("OBERLIN ART STUDENTSSSS!!!" ah memories) shoutout, as I believe they are both alum and actually have a show at the college come November. cool beans! I would not miss it. and apparently there's a good bakery in Cleveland they used to frequent, but I don't recall the name of it.

the girls played a good set and even brought out the woman of the night, ZOOOOOOEY, to do some backing vocals. seriously- when Zooey came on stage, except for all the squeals "ILOVEYOUUUUU" (me, I was compelled to scream "I HATE GLUTEN TOO ZOOEY!") everything was silent.

Zooey, in person, is an adorable pixie. yes, yes. I wish my glasses were here already so I could have seen her even better. she's so cute!

anyway, the gap between the Chapin Sisters and She & Him was pretty unbearable. like I said before, it was hot and crowded and more people flocked to the pit and the HOB is kind of awful about space. at this point I seriously felt like passing out. but I thought of Zooey. I thought of our life together in 500 Days of Summer and how I had to share my love of the Smiths with her and how she had to break my spirit/soul/heart and IKEA and OH MY GOD, I kept my strength.

then, the lights went low (after countless advertisements for Kiss and the Academy Is...,, which strikes me as something just wrong) and the band members, one by one (the Chapin Sisters also were the back-up singers, those girls with the amazing harmonies) and then MATT WARD looking like THE DEVIL HIMSELF HOLY SHIT and then Zooooooooooooooooooooooooey!

here's another picture because you just deserve it that much:

well, whatever song they started with, I do remember this: ZOOEY BOUNCED. AND SHE BOUNCED A LOT. THROUGHOUT THE EVENING. LOTS OF BOUNCING. ZOOEY BOUNCED LIKE THE SAD BLOB IN THE OLD ZOLOFT COMMERCIALS. oh, it was a thing of beauty. it was like the Siberian husky puppy that had come up to me that afternoon to beg me to play with it and I denying the puppy my precious time. just like that!

I will say, though, that She & Him started...surprisingly weak! like, they were nervous or something. and why would they be nervous? they are She & Him!!!! well, whatever, but initially I was not as impressed as I thought I would be. hmph. they seemed to get more and more comfortable as the night went on, though. better- despite some technical difficulties; they got a LOT better towards the end.

these tools, though, immediately took like a dozen photos- oh so many tools at that show, I kid you not, hence the title of this review- with their flash on so bad it practically blinded me and I was not in the line of attack! so Zooey, after the first song, was like "stop you're stabbing my eyeballs." she was very deadpan, very wry. very much what you see in the movies.

the best songs of the night, by far were "You Really Got a Hold On Me" (swooooooon), "Ridin' In My Car," "Sweet Darlin'" (which she jammed out with M. Ward on the keyboards- so cuuuute), "In the Sun," "Gonna Get Along Without You Now," all da covers, "Why Do You Let Me Stay Here?" and ESPECIALLY the cover of Screaming Jay Hawkins "I Put A Spell On You." her voice was so strong at that point, literally, I had little chills.

the first song of the night, btw, was "Black Hole." now I remember it.

they managed to pack a lot of their catalog- a lottttttttt- into that show. which was the thing that put the biggest impression on me, because I've been to other shows where my reaction afterwards was "...that's it?" but that wasn't the case here. and for that, I have to say, expectations were blown out of the water.

plus, a shout-out to the Mike guy from their band, this crazy old guy who was just awesome. he had a cheering section in the audience, which says something, right there.

now, the fans. wow. first of all, there were scattered technical problems throughout the evening, but there was this band of M. Ward diehards in the back that just kept screaming for him. to the point where it was rude, really. there was just a lot of rudeness at the show, and the audience was just SO not into it. like, WHAT THE HELL IT'S SHE & HIM!!!!!! like, I didn't even know what my own singing voice really sounded like until I caught myself singing "In the Sun" by myself while exercising one day. I would catch myself start humming along to the music- start mouthing the words, even gently going along with Zooey- until I realized I was like one of two people in a packed crowd that was doing so. and no one was dancing, everyone just seemed to be there to gawk at Zooey. it was disheartening, really. in my mind, when I was getting ready for this show, I saw a bunch of spunky young American teenagers wearing plaid and poodle skirts, snapping their fingers, swaying, etc. no! not so! my Norman Rockwell dreams were crushed by this! even the demigoddess herself had to pretty much force audience participation with "In the Sun," and- seriously!- how do you not listen to that track and not want to run down the halls of your old high school to jump into the arms of some cast member of Glee? right, right?

there was a Joni Mitchell cover I didn't expect, which they excelled at, "You Turn Me On I'm a Radio." oh Joni! and there were a few covers I didn't recognize. be disappointed at me now! I am a bad fan!

all in all, She & Him were good. they played the audience well after warming up to us, and were polite and sweet and you wanted to kind of invite them over to your mom's for dinner. the Chapin Sisters were also standouts, but the audience. I feel like this concert should have been in my living room and not at the House of Blues. just saying.

MY FAVORITE COVER THEY DO

(which they did not play, to my slight disappointment)

also, happy birthday to Zooey's great aunt, who was in the audience!!!!! along with a hoard of Deschanels from the Cleveland area! they all went to Red Lobster afterwards! just kidding! I don't really know!

*resumes writing Zooey Deschanel-Kemp all over her notebooks*

B+ for effort, heeeeeere.