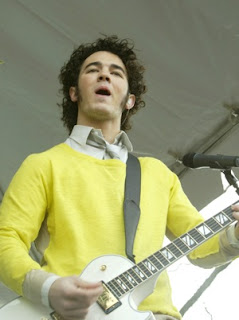 Kevin is in a good mood.

Over the last two days, I've realized that Kevin Jonas is more like me than any other Celebrity out there, with the exception of Emmy Rossum.

So Kevin Jonas, knows what it's like to be an outsider and to be different from the rest of the group.

Now it's time that I apologize for all the mean things I have said about KJ over the last year and a half.

Nader Bouberhan is sorry for:

3. saying you were untalented in comparison to brother Nick.

4. telling my older sister not to dress up as you for Halloween because it was stupid.

(I wonder when Kevin Jonas will realize that we're best friends, but JONAS L.A. premiered tonight, and I think I will watch more. Cheers Kevin, I will lift a glass in your honor, but I won't drink because of that purity stuff.

QATFYG:
Would you be Kevin Jonas' best friend if he offered you the job (that is if I wasn't already in place).