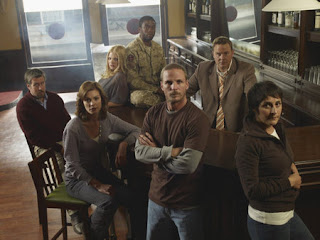 So I just caught the first installment of "Persons Unknown," which is a miniseries on NBC Mondays about a bunch of strangers that end up in a hotel/town and don't know why they got there.

This might have ties to the movie of the same name, but I don't know. Never saw it.

So it's kind of okay, but for some reason as this series continues to pan out, I fear that it will take on a flat tone, which will bore us.

The show has characters from all different backgrounds,

A counselor, who appears to be a mental patient,

A mysterious mystery man on mysticicity.

And even Alan Ruck (Cam from Ferris Bueler's Day Off (Sp))

And the rest :P

There are cameras that are watching these people at all times, and there are people who serve them Chinese food.

That is all we know. However, it might turn out to be exciting. Perhaps more exciting than Deb Messing in the "Starter Wife."

QATFYG: What would you do if you woke up in a hotel with a man in sweater named Joe?