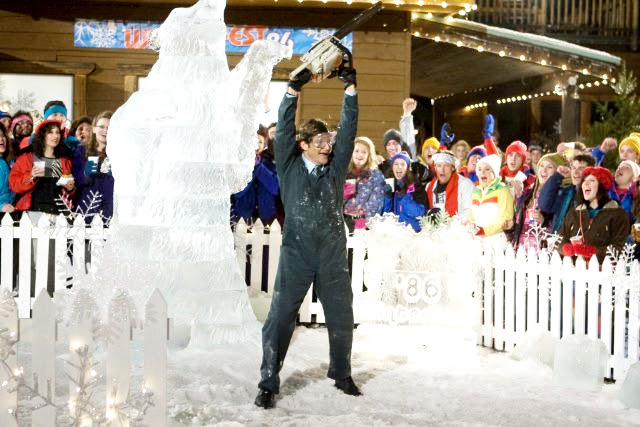 IS HE GOING TO LOSE HIS ARM? NEVERMIND...

This looked so, so, so weird. I mean- there aren't enough words to describe how weird the concept is! You can tell the writers were on some kind of chemical substance and were like "oh my god! this is such a good idea! seriously! SNORT- now where are my pop tarts at!" then the writers passed out and they were in Mexico.

but all my friends that saw it had nothing but positive, glowing things to say! what the hell!

so I will tell you what I thought of what is bound to be 2010's greatest accomplishment in cinema, : it was one of the most genuinely entertaining films I have ever seen in the theater. I haven't heard that much laughter in a long time.

here's the gist of the movie, if you haven't somehow figured it out by the title: four friends (well, three, kind of) get together in a resort town that they had some awe-some times in the 1980s when they were still young (and had hair and could have a lot of sex et al) after one friend's botched suicide attempt. heavy subject matter? I know. It's like Sophie's Choice for our generation, really. there, they encounter...a mystical hot tub. O_o

I have always wanted to encounter a mystical hot tub, btw.

at its heart- like Sixteen Candles that star John Cuasck was in so long ago- it's like a John Hughes film with a raunchier center. really- it's rated R for a reason. there's a lot of, um, semen references, projectile vomit, homo-eroticism, profanity, and 1980s songs like "I JUST DIED IN YOUR ARMS TONIGHT" by Cutting Crew, here in case you forgot it (AND HOW COULD YOU FORGET THIS CLASSIC?)

There are a lot of homages to fellow time-travelling movies Back to the Future and Bill and Ted, which I appreciated. AND CRISPIN GLOVER IS IN IT AND HE HAS LONG HAIR. Crispin Glover! my god.

also, Chevy Chase is delightful and douchy. and that girl that played JANIS IAN in Mean Girls is in here as some Spin reporter/Cusack's secondary love interest. This girl is awesome. Why isn't she in more movies?

Anyway, it's a fun movie with a message of sticking-with-your-friends-and-shit above it all. that's through all the various hijinks, grossness and, um, hilarity. see this movie. you'll have a good time.

sometimes, that's all you need!

so if I had a hot tub time machine, I would totally make this past year not happen. WHAT WOULD YOU DOOOOO