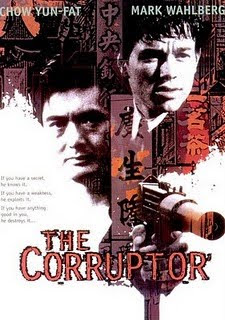 So, another purely selfish S/S, but aren't they all?

It goes to Chow Yun-Fat,

but this one has to begin with the QATFYG.

QATFYG:
Has anyone in this sphere seen "The Corrupter?"

I remember back in 1999/2000, I saw this in the video store every week, and I always wanted to see it.
But I was too young at the time (tragic age discrimination ) but I always planned on watching "The Corrupter" when I was older.

However, over the years I have grown a distaste for Mark Wahlberg.
I just don't like him in most things. On some levels he and I get along, but things like "The Italian Job" or "The Happening."

I had forgotten about this movie, but I was watching "Wendy Wu: Homecoming Warrior" tonight, and I was reminded of all the Chinese things I like, including Chow Yun-Fat.

PS: Crouching Tiger is the Fried to my Rice.