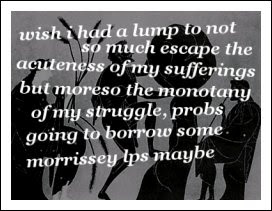 Last time, although Swann conceded Odette’s time spent with people not happening to be himself did not necessarily mean he had to be stricken with the urge to suicide, his so-called love for her nonetheless remains at the potency that, “as they say in surgery, [it] was no longer operable.” Ever the pragmatist, the lump he finds on his abdomen one afternoon brings him such a relief, for, tying the two previous notions together, his suspected fatal tumor and he are going to be BFFs: Swann reasons he’ll be liberated from taking any further charge, as the disease will now handle all of the managing. He’ll be its sexxxy plaything. Even better, if he finds himself coming to desire death, he finds this won’t be an escape from the jealousy-caused suffering he’s been putting himself through, but, skipping the ephemeral altogether, it will end his struggle’s monotony. Psh, Sisyphus didn’t have a girlfriend, either.

Happily, Odette doesn’t actually care one way or another— acting out Mme. de Laume’s worldview in that she replaces her interest “from the people [she] does not know [to] an interest in the people [she] does”— she gains the habit of no longer being so timid that she may knowingly displease or provoke Swann and goes on with her day. Naturally, the displeases Swann because— oh god, don’t you just hate him? Don’t you want to make him start an eHarmony account and make him check it twice a day just so he’ll stop being such a whiny, self-victimized frump? Do you think there’s a Charles Swann on eHarmony right now???

Speaking to her on p. 301, he resolves to find out whether Odette is “really that creature which ranks lowest in mentality and (…) charm” who is “incapable of giving up a pleasant thing,” though, given his sentiment 13 pages later, he regards his jealousy as the conduit which would make him find something “atrocious [and] unpardonable” toward her. Being that he can’t give her up even though he doesn’t really even like her in any wholsesome sense and comes to live in an anxiety closet, a fussy reader may wonder if it’s she he enjoys or if he is instead using her as a means to merely be nervous and miserable at every moment of his life?

I think it was the 13-year old girl who lives inside of Billy Corgan who wrote “I’m in love with my sadness,” but, even if not, it sounds like something she’d write and it seems this is right about where Swann is at. It doesn't seem as though he wants love or to experience such a thing with Odette, but he’d much prefer to merely wither away even if he’s not entirely cognizant of it. Breaking back into first-person narration for a bit, Proust notes “he did not have (…) happy days during which to forget his sufferings that will return at night, as I had at Combray”; the “slavery of [this] love” which Swann holds as “so dear to him” really isn’t doing much other than, as per p. 328, solidifying and hardening his heart “like an encrustation cut into him, [which] never moved from there again.” On that note!