Should 'The Big Bang Theory' Be Moved to Thursday Nights?: An Objective Look 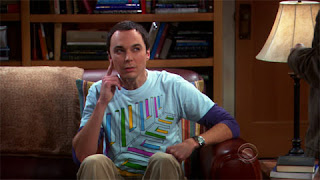 Let's take a look at why this is a bad idea:
- It's later in the week: i.e. Humor enthusiasts now have Nothing to look forward to on Mondays. Sure, the show with Charlie Sheen is still on, and I'm sure it's hilarious as always, but it is syndicated ad nauseum 24/7 and available to watch on Justin.TV, even though sometimes you have to type in Dos Hombres y Medio to find it.

- You'll forget about it: Seriously. There's already a day that starts with a T that comes before Thursday.

- The show is now the night's lead: It'll run up against Battlestar Galatica, Emergency 911, House MD, Young Frankenstein, Sabrina the Teenage Witch and all of the other Thursday night primetime dramas.

- Something about patience being a virtue.
"Look," whispered Chuck, and George lifted his eyes to heaven. (There is always a last time for everything.) Overhead, without any fuss, the stars were going out.