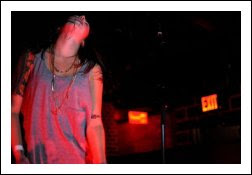 It was kind of disappointing how the Grog Shop didn’t play anything by Tiffany or Berlin between sets, especially given all of the mid-80’s Madonna; was kind digging Ace of Base with everyone else, but the first opening act walked onto the stage while insisting they weren’t No Age. Two reasons to hate them, and we had just met!

Oh but did you know, about a block and a half away, Harry and the Potters were performing in the alleyway behind the bookstore and every other song they did was the one about Hagrid? Maybe you were too busy standing in line for Sleigh Bells? We got to make heart hands while going “Hagrid!” and some other people made book noises during one of the other songs which were like “swish swish swish,” because books apparently do that when their pages are being turned!

This was totally better than the first band—if they were actually No Age, not playing “Ripped Knees” would have been rude, especially because I / hundreds of people kept shouting for it, but their refusal was probably because they weren’t really No Age and the person near the stage who made them deny it was making fun of them. It happens. But if you were kind of confused just remember A) No Age doesn’t have laughing as like ¾ of their lyrics and B) doesn’t sound like a band no one listened to in 1994 either, which are both worthwhile things for bands to do. Didn’t really seem like anyone “cared” about this band or thought their music was a “worthwhile” way to spend time.

Listened to some ABBA and Fine Young Cannibals afterwards, which everyone was pretty excited about but when INXS was playing, some tall, short shorts-wearing dude started making all of these weird noises for mic check or something and then the audience stood around and hung-out for a really long time. The tall dude was probs getting handjobs the entire time because those legs went all the way up, you know how it is. Were you one of the people giving him handjobs? Thanks for making everyone else stand there for like an hour. I was kind of thinking their set was going to be Ke$ha covers because I secretly want everything to be Ke$ha covers, but it turned out to be a couple songs about killing shit or something.

But what happened during Sleigh Bells? I’m just kind of remembering strobe lights and loudness and lots of frat dudes getting into fights, because this is how they dance? It sort of felt like I was at a Glenn Danzig performance in 1991 or whenever where the only reasonable thing to do is punch everyone in the face, but Alexis Krauss is way too fabulous for that. I couldn’t really see her because of the frat dudes, thanks for ruining my life by the way—kind of hoping the creepy man on the sidewalk who was giving cursed roses to people afterwards gave those dudes the evil eye and Alexis kicked them, in their faces. Anyway!