Another Summer Mix. Is this the third one? 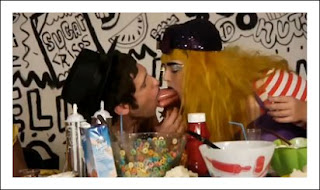 Hey, dudes! 01. What is this thing? 02. Dum Dum Girls 03. Those Cold Cave folks have so many remixes of this on their new EP. Shh, but I think their remix EP turned out better than all of Lady Gaga’s remix EPs. Maybe “The Fame (Glam as You)” is ok. I kind of really want one of those “Alejandro” t-shirts, the one where she has a bird on her head, but $25 + shipping? So, so sad about that. 04. Hunx + His Punx, you should watch all of his videos. I wish there were Hunx t-shirts, they’d probably only be $10, and I could wear them everyday even though I’m not really into t-shirts. 05. All Saints Day is the new thing from the Vivian Girls’ bassist so I am obligated to care about it, because I love Katy. Except she's so shy, she never calls. 06. Oh? This album is kind of long and not very diverse, but it’s nice to see Matador working with weird indie rock bands again. Bummed they resigned Interpol. 07. She’s a classy lady! 08. Still kind of ambivalent about Glasser. Her debut album is coming out pretty soon so I guess I’m looking forward to that, maybe. 09. This is some crazy dude who performs under Perfume Genius, the entire subtext of his bio is like “Well he’s probs going to be dead soon,” so—

10. I’m not sure if this is a band or just one person? Tamaryn? Anyway, everything I’ve heard from her or them or whatever so far reminds me of a female version of Disintegration, so maybe you’ve been waiting since 1992 for Robert Smith to make a worthwhile album again, too??? But this lady might have had me get over it already. 11. Can you find Sufjan! 12. From last year’s Boston Spaceships’ thing. As a longtime Robert Pollard devotee, the part where he goes “I love the coastline solo,” it not in this song, but it's so nice! So, so nice. 13. Frankie Rose was in the Vivians and some other bands, too. She seems pretty ok. 14. More Hunx. The video for this one has kinky Cheetos, but “Don’t Cha Want Me Back” has kinky everything (see above.) 15. Cosmetics 16. I met someone several years ago who was really into Kate Bush and made me this really shit coffee one afternoon while listening to The Hounds of Love, going on and on about how amazing it is. I noted “I know, it’s so much better than this coffee, too!” although she knew I wasn’t joking and we never actually became friends. Maybe she and Wild Nothing would have? 17. Why won’t you recognize how psychedelic I am??? 18. Annie! She is from Norway, and you should love absolutely everything about her, seriously.