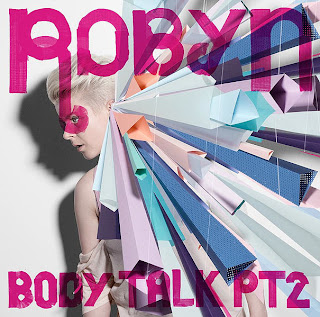 Robyn - Body Talk Pt. 2
Robyn (pronounced Roe-BINE) is Scandinavian pop star with a keen grasp on matters of substance. First and foremost, she is a linguist, fearlessly tackling both the standard American English pop vocabulary and African American Vernacular English slang on the same album, a feat rarely parallelled this side of Hyperborea.

Apparently there is a Body Talk Pt. 1 and a forthcoming Body Talk Pt. 3 which will place some of the lyrical content in a larger context. I haven't heard them, but I can only imagine that they are flawless.

The beats on this album are pure candy. And I mean like Aqua-level candy. When the vocals on the first song, "In My Eyes," starts, I am in absolute idiotic bliss.
The feeling continues throughout.

First of all, the album is only eight songs, an immediate draw for me. I hate filler and overlong albums. Each song is about four minutes long, which is perfectly suitable.

The main obstacle to appreciating the album is the natural incredulity that follows Robyn delivering lines such as "Protect yourself / Cause you'll wreck yourself / In this cold hard world / So check yourself" on "Love Kills." And not because it's culturally inappropriate either. I couldn't imagine anyone from Flava Flav to Soulja Boy delivering this line with credibility because it's so inauthentic on the face of it. In fact, the only person I've ever heard deliver a line similar to this with great effect is Sasha Baron Cohen. And somehow, someway the listener has to know that Robyn is more intelligent than this. I'm not going to bring this write-up into 1933 Berlin by suggesting a Scandinavian predisposition for intelligence, but Robyn is clearly very articulate when she wants to be. Maybe it's satirical? I don't know. I don't care either. After two listens the lines are so ingrained as pillars of the song it doesn't even matter anymore.

This is a solid dance, electro-pop work overall. Track seven, "U Should Know Better," is truly unique because it's the first time I've ever heard Snoop Dogg on a synthpop track, and it works flawlessly. On this track, Snoop and Robyn advise various groups (the LAPD, the Prince of Darkness, the Vatican, et al) not to "fuck with" them. It is convincing. Unfortunately the profanity may preclude it from being released as a single.

The last song, "Indestructible," is the only thing that prevents one from playing the entire album as a seamless club or party banger. And the listener should be advised that it is an explicitly wonderful song, just very stripped-down and tangential from the overall tone of the album. However, it cleanses the palate appropriately of any autotune or cheesy lyric misgivings.
A cursory look at my gripes here might suggest that this isn't the best pop album I've heard since Ciara's Fantasy Ride. Such a reading would be inaccurate.