August 15, 2010
By AWM and Brittany the Useless Critic
Some of you may know Tila Tequila by virtue of her acclaimed musicianship on songs such 2007's hit "Fuck Ya Man." Who could forget that classic? I know it was my soundtrack to the mid-2000s. You may also know her as the dirtysinful slut on the MTV reality show A SHOT AT LOVE. This is where she took unsuspecting saps from both genders and sucked them SOULLESS. 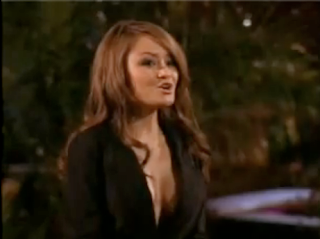 However, after events at Saturday's "Gathering of the Juggalos," she may be known for being the unwilling participant and in a modern day Pagliacci reenactment. Tila, by all accounts, that sinful dirty whore, is fortunate to have escaped with her worthless life in tact. oops. that slipped out. Just kidding, she is super hot, even if she recently made fun of Kesha's wardrobe on Twitter -- something that is actually reprehensible.
Pertinent Twitter posts show Tila's excitement about the performance, juggalos, and the Kottonmouth Kings, but after the life-threatening fiasco she changed her tone, insisting that she plans on suing the Gathering honchos.
Former contestants of A SHOT AT LOVE could not be reached for comment.
How does one aggravate a Juggalo? By being a sinful whore. Ke$ha would not have this problem.