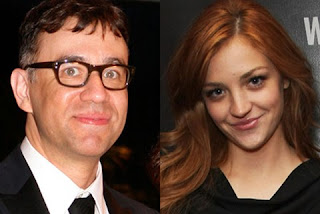 Ah. Okay. So apparently Saturday Night Live's Fred Armisen is now dating his fellow SNL co-star Abby Elliott. Abby is 23 and the daughter of SNL alum Chris Elliott. Fred is 43 and...is still technically married to Mad Men's Elisabeth Moss.
Wat.
Fred and Elisabeth met on the set of SNL when Moss' Mad Men co-star Jon Hamm first hosted in October of 2008. They got engaged two months later and married last October. News reports say Armisen and Moss first split up in May, although the news of them breaking out hit recently just as the news of him dating Elliott came about. I specifically remember watching pre-show of the Golden Globes back in January and a host asking Elisabeth Moss why she became engaged and married so soon after meeting Fred, and her response, cheeks blushing, smile a-glow, was "Sometimes, you just know, you know?"
I wonder what she knew?
Because here's something my lovely friend Hannah and I knew back in June. We knew of Fred and Abby before anyone else. Yes, that's right, sometimes my living in Los Angeles has its perks. Sometimes it's Spiderman carrying his luggage across Hollywood Blvd at 2am, and sometimes its catching Fred Armisen and Abby Elliott seeing a comedy show at Upright Citizens Brigade on a brisk June night.
Now, it's not like we automatically knew they were together, since there were no signs of affection at all, because it simply looked like they were just two platonic pals enjoying (or not) a night of comedy. Here's what we did see: 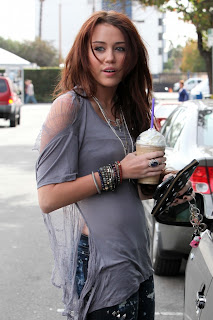 Yeah, that's pretty much it. So Hannah and I were in the know before all y'all, okay? Even though we didn't suspect anything at the time. Although it was weird Elisabeth Moss wasn't there. And we know she must have been in LA at the time since Mad Men films in LA, coincidentally in the same studio where Hannah worked at over the summer.
~*Oooh*~
First I see Marilyn Manson and Evan Rachel Wood back together before anyone else knew (they came into my old job once and Manson bought 2 hot dogs from me and came back for more), and now a couple who most likely was a couple at the time even though no one else knew. Who's next? Edward Norton and Salma Hayek? Oprah and Gayle? Nick and Miley????