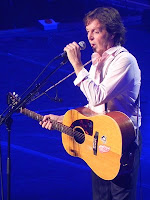 (for the record, I was beyond delighted when Ursula agreed to write this, because she's one of the best writers I've ever stumbled upon. for reals. the Useless Critic is not worthy of this girl. here she is though, writing about the former Beatle who helped open Pittsburgh's newest concert venue/hockey home, the Consol Energy Center, on August 18th)

The day after I saw Paul McCartney live in Pittsburgh, at the brand new Consol Energy Center (A.K.A. brand new hockey arena), I spent many hours on the couch in a semi-vegetative state, flipping channels, eating whatever I could find in the freezer. Seeing Paul in concert is hard work. If you’re a one-generation-late Beatles fanatic like me, there’s a lot of screaming and shrieking and dancing and singing that occurs when you witness the majesty of SIR PAUL MCCARTNEY IN THE FLESH.
Paul is a bit droopier in the face than in past years, but he did just turn 68, and for all that, he’s still just as energetic, quick-witted, and hard rocking as he was in his youth. I might have scared the old people behind me when I jumped up in hysterics the moment I saw Paul walk on stage (Oh my God! Oh my GOD!).
Whatever era you love the most from Paul’s many decades of successful music, you would have been satisfied with his performance. He started the show with “Venus and Mars,” “Rockshow,” and “Jet,” all from his career with Wings, and then launched into “All My Loving,” an early Beatles classic. Later on, he played “Highway” and “Sing the Changes,” songs from the recent Electric Arguments released under his alter ego name, the Fireman.
Yes, Paul has an alter ego (apparently Sergeant Pepper didn’t quite do the trick), and yes, the Fireman’s music is just as fresh and exhilarating as anything else Paul has ever created. “Sing the Changes”? This is the kind of song that makes you feel like you can achieve all your dreams while zooming down an empty interstate with the top down and your hair blowing in the wind, and at the same time lowering your cholesterol and meeting the love of your life.
Of course, between almost every song Paul made a joke or told a story, leading the crowd to respond in kind, and you have to consider the immense power the man has when several thousand people are clinging to his every word and laughing at the most slightly witty remark. He is one of the true rock gods. At the same time, though, he doesn’t have that holier-than-thou, sexier-than-thou air about him that other rock musicians do. He sort of bounced around the stage, wearing a white button-down shirt with suspenders (suspenders! So cute!), reading signs that his adoring fans on the floor had made for him. “Please serenade me,” he read, squinting into the crowd. “Okay, this next one is just for you, not for anyone else, all right?” Laughter and squeals from the crowd—and then Paul sang his beautiful “Yesterday.”
I don’t know much about guitars, but it looked to me like he played three or four different ones (and I’m sure at least one had to be a bass), as well as his legendary grand piano. He also played a little upright piano, which was painted with all sorts of psychedelic colors that brought to mind Yellow Submarine and general 1960s funkiness.
Paul made sure to pay tribute to some very important people: he crooned “My Love,” for his first wife, Linda, and “Here Today” for John Lennon. He played “Something” on the ukulele for George Harrison, with a video montage of photos of George played behind him.
Before nearly every song, I squealed and bounced up and down in my seat and clutched my boyfriend’s arm. By the end, everyone was standing up and going more or less nuts. The show ended, as Paul’s always do, with “Sergeant Pepper/The End,” a song that concludes with the oft-repeated “And in the end/the love you take/is equal to the love you make.”
You go to his concert (or concerts), and listen to the absolutely fantastic and diverse musical selections, and you have a rocking good time. And then at some point, you get a little quiet, and looking at Paul you remember that this guy was a MEMBER OF THE BEATLES and he really did hang out with John Lennon and George Harrison and Ringo Starr, and now here he is. He is close enough for you to see him. You’re probably breathing air that he’s already breathed tonight!
And the hysteria begins again.
Thank you, Paul, for another gut-wrenchingly awesome show, for still being alive, and for going on tour even in the late years of your life to bring your music to us. It was one hundred percent worth it.
- Ursula