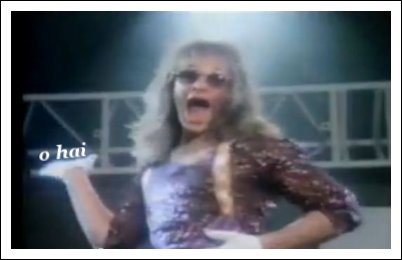 As many of you know, I tried and tried to arrange a David Lee Roth interview at the beginning of the summer without so much success: I watched his "Just a Gigolo" video for probably the first time since 1987 this past May, was delighted, and decided I needed to talk to him about this. Sadly, my requests weren’t honored and I became confused, because, really?, has anyone really wanted to talk to him since his Crazy from the Heat follow-up, which I can’t remember the title of? Probably not. As for you, C.C. Deville? I may have hoped to use you as a half-hearted replacement, but can’t believe your publicist wasn’t even polite enough to respond! And I don’t feel motivated to look-up the dudes from King Diamond, which is just as well because I doubt they possess much in the way of a non-“mayhem / the devil / gash” vocabulary. Please don’t click that.

Anyway, it wasn’t until several days ago upon coming across this article, Van Halen said to be working on new album with David Lee Roth, that I actually felt disappointed about any of this because, in the midst of answering / considering questions like how Van Halen coped with having the Back to the Future theme song stolen from them by those Huey Lewis and the News assholes, Dave could have totally dished to the Useless Critic about the new Van Halen album— maybe someone on E! would have mumbled something about this! Maybe some dude named Randy would have smashed a beer can on his face, from being so excited! No one remembers who the vocalist after Sammy Hagar was, but I’m hoping to get in touch with SaHa (which we’re going to pronounce “Say Hey”) to see if he’d like to share his thoughts about this turn of events amid sympathizing upon how we have both been ignored, hopefully starting a twitter battle between he and Van Halen’s management. Does SaHa even twitter? If you know anything about this, please post it in the comments!