nancy and lee, ALWAYS AND FOREVER 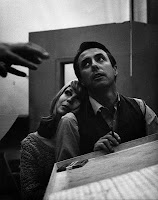 watch SOME VELVET MORNING, which is pretty trippy. and as is the video.

Before there was Zooey and Matt or Dean and Britta or any of those other cute male-female duos that occupy important spaces in mainstream music (I guess it's arguable about that last pair), there was Nancy Sinatra and Lee Hazelwood.
I feel it's criminal I overlooked them until my 20th year of existence, when I listened to one of their albums on a whim after getting a job at my local zoo. It was a rainy May; I was stuck in the basement; the album was totally streamable on last.fm. (not so anymore!) This is a pair that's as American as baseball or apple pies. Kids should listen to their catalog in elementary school, along with the music of Woody Guthrie, Ke$ha and the Gershwins.
If my parents had been more into music, I wish they would have made me listen to them as a small child. I think I would have loved Nancy and Lee as a toddler, as a kid, as an adolescent. Their music conjures up thoughts and images of the American west, of a modern day cowboy entering town with spurs that "jingle jangle." Their music is what I want my life to be, in 90 words or less. Another voice to complement mine on lyrics that manage to come off as both erotic and spiritual (is there any other kind?) Yes, please.
The impetus for this post was an article I read, reflecting on Hazelwood's considerable legacy to pop music. The man was beyond a legend; may he rest in peace. The author of the article pinpointed a reason for the duo's success: Hazelwood was much older than Sinatra when the two were put together to make music. Part of the older man/younger girl fantasy. I see publicity photos of the two together, from the 1960s. Her somewhat innocent and blonde; him looking tired with an epic mustache. As much as it makes me kind of wince, to buy into the myth of Nancy and Lee is to buy into the myth of the two as lovers (as far as I know, they never were).
Nancy Sinatra was brought to Lee Hazlewood when her musical career was falling flat, distressing studio heads. Sinatra's daughter! How could she fail! Thus, they brought in seasoned veteran Hazlewood, who had success long before his stint with Nancy and would continue to have success (in SWEDEN) long after. The time period was the early 1960s. Hazlewood was bored by the Beatles, but impressed by the Rolling Stones.
:/
Let's keep going. When they recorded together, Lee presented her with a song called "These Boots Are Made For Walkin'." Now, we all know that Nancy Sinatra's voice isn't the best. It has a quality that's likable and pleasing to it, a husky whisper of a girl that wasn't as sweet and innocent as her hair and age suggested in the pre-Britney era, but it's not strong enough to invite her to belt out the national anthem at a (wait for it) baseball game. There is room for all kinds in popular music, though. Nancy's voice sells sex. And if not dirty sex, then at least sex that's fast and, not loving.
Lee honed in on this, despite the fact that the initial recording session was uninspired. Do you know what he did to his protege, his singing Lolita? He pulled her aside and told her to "sing like a fourteen year old that fucks truck drivers."
Nancy, indeed, could do just that. She went back in to the studio and recorded the version we're all familiar with, the version that many a drag queen or drunken women has butchered at karaoke. It became her biggest hit and the song most people associate with Miss Sinatra, who would never go on to reach the fame her father- Chairman of the Board, my sworn enemy- held during his lifetime and thereafter.
The two would join forces and record some of the best alt-country before alt-country even existed. And you wouldn't think their voices would work as well as they do, but it's like milk and honey. Nancy sounds sweet and sometimes apathetic; Lee sounds old and warbling in a faded way, like a pair of jeans worn too much and losing their fit. It's like milk and honey, really.
Lee Hazlewood would eventually move to Heaven aka Sweden and Nancy Sinatra would eventually duet with Morrissey (ugh). There are other milestones in their lives, but I will glaze over those, because I'm currently writing this without internet and therefore cannot factcheck my sources.

Hazlewood was on the verge of a comeback before his death in 2007. He and Sinatra had recorded together, one final time.
Despite this, we're still left with a great wealth of stuff from the 1960s and 1970s that is as fresh as it ever was, to this day. As summer winds to a halt and kids file back in yellow buses, I find them to be kind of the perfect, wistful soundtrack. Especially "Summer Wine," which is a semi-mournful tune about a turned-for-the-worse summer romance, a kind of Samson/Delilah stripping of pride (done by that evil woman, of course. You should know how pop songs work.)
They just don't make them like this anymore. Zooey and Matt, as much as they're rightfully adored, will never compare. Nobody will.

Legends are legends for those reasons.

- what is your favorite musical pair? Sonny and Cher?
- should I grow a moustache?