Wild Child was on TV tonight. 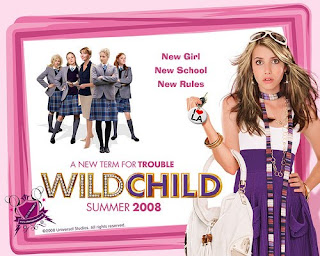 So I just got done watching the ABC Family premiere of "Wild Child," starring Emma Roberts.

I watched this film to connect with my Wild Side, by being socially deviant once again and watching a movie that was not made for 22 year old males. I feel so rebellious.

If you remember back when I reviewed LymeLife, I made the Bold and Daring move to say that "Emma Roberts is a Prick."

And once again, Emma Roberts is playing a girl that is a notorious PRick, capital PR.

I had some review notes written, but I scratched them. The first 38 minutes of this movie are so incredibly bad that words do not describe it because there is nothing to say.
Emma Roberts plays a party girl from the USA, who gets shipped off to English boarding school, and we don't get to see anything interesting from the back story.

After an hour,I found I was kind of interested, but not really.

So,
this is a bad film that gets mildly better, but still bad in the end.


If you need a Prick, get Emma Roberts.

If you need a teen with Problems, get Kristin Stewart.

If you need a hole who is a total F* up in life, get a Lohan (either or any, but that wouldn't really be acting.

QATFYG:
What did you do tonight? I hope it was better than watching this looooousy film.

#EmmaRobertsIsAPrick but I mean that in a positive way, her characters are often pricks, and overall her performance of them is well...pricky....so that makes it okay for some reason.