Look At What The Light Done Did Now 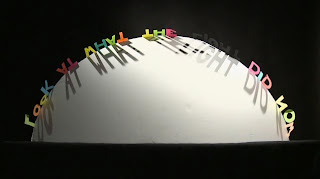 Last evening I had the amazing opportunity to attend a screening of the Feist documentary, Look At What the Light Did Now. When I first heard about a documentary being made on one of my favorite musicians of all time, I was beyond excited, especially since the documentary (the title of which is taken from a song by Little Wings, who's singer appears somewhere in the film - and who I saw open for Dirty Projectors last Halloween, randomly) would mainly chronicle the making of Feist's lastest album, 2007's The Reminder. Actually, fuck that, I was SHAKING AND CRYING. I caps-locked it to all of Twitter and Tumblr, knowing only one or two people would care, and I snatched up tickets as soon as I heard about it.
First of all, the screening was held at the Hollywood Forever Cemetery which, of course, brings a spooky feel to the evening, as it's almost Halloween, and well, we're in a freaking cemetery in Hollywood, where Rudolph Valentino, Estelle Getty, and my friend's uncle are buried (said friend actually accompanied me to the screening). Try listening to some of The Reminder, or even one of Feist's earlier albums, Let It Die (aka perfect beyond infinity), while trudging past elaborate graves at 11pm at night while random sprays of mist are blocking your way. Try it!!!
But the screening actually was held inside the Masonic Lodge at the cemetery, which meant we were all basically in a huge mansion viewing the movie projected a giant wall in a giant room. Also, Emilio Estevez was there (?!), just seeing the movie like a regular person.
The documentary started off a little slow, but picks up so beautifully and intimately you almost want to cry. I saw Feist live in June of 2007, right before she was featured in those iPod nano commercials, and I remember thinking it was one of the most beautiful concerts I had ever been to. "The Holy House of Leslie Feist" was what I kept chanting in my head. It's what I listed as my religion on Facebook. It's what makes me want to go back to being a huge Feist Fangirl. Footage from her Canadian and European shows are featured, but the film mainly seems to focus on the artistry of her live shows as well as what went on while recording The Reminder in a beautiful house in...France I want to say? Montreal? Either way, everything about it was wonderful. Who knew some of The Reminder was recorded with potpourri and Fisher Price toys?!
My friend doesn't know Feist's music too well, but after the screening she was completely raving about Leslie Feist and the film. I think she was in love. The film has inspired my friend to do more with her life --- creatively, visually, and artistically.
This is why I love art and music and taking people to shows. Inspiration, love, and...well, light.
Plus, the film includes a sweet-ass video of Feist rapping with Chilly Gonzales in 2002.