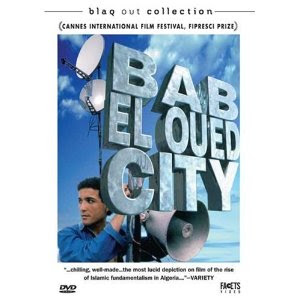 So, this week's magic s/s of magic goes to the actor Hassan Abidou.

He is seen on the cover here in the movie "Bab El Oued City," an Algerian film from 1994.
It's kind of an interesting film where Hassan plays a man who gets angry at the sound of Muslim prayers which play over the haut-parleur (speaker), so he cuts it down and throws it in the Med. And that is pretty much it!!!!!!!!!

Why am I posting about this?
Because tomorrow night I will be in Bab El Oued (a neighborhood in Algiers).

That's right, one of my missions this fall will be to spread the Useless Critic to Africa.

So wish me luck, and I will try to post as much as I can, but internet might be a little scarce in the "Dark Continent."

QATFYG: Is it still PC to call Africa the Dark Continent?
And do you Arab people scare you?