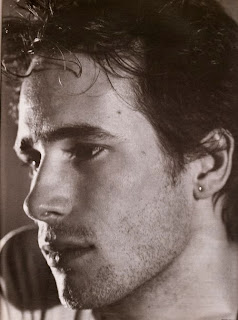 Ah, Jeff Buckley. Light of my life, fire of my loins, the tear that hangs inside my soul forever, etc etc. He would have been 44 years old today (er, since I'm posting this late, it might be "yesterday" depending on when you read this) if he was still alive. Forty-four!!! That's insane. And as an insane Buckley fan, oftentimes I wonder what he'd be like if he was still with us today. Would he wear flannel a lot? Would he still be with Joan Wasser (aka an amazing fucking musician - I should post about her)? What would he think of Kesha, Kanye, social networking sites (he would have hated them all I'm sure, although he probably would have a soft spot for Yesus)? How many albums would he have put out by now? Would he still wear those ill-fated black steel toe boots that aided in his death in Tennessee all those years ago?
I don't know, but he sure does have an affect on people, including me. I've been a major fan of his for years, yet I still cry while watching YouTube videos of him (Kat Dennings and I have something in common), I still feel compelled to read that extensive biography of him and his father that I've already read twice, and twice a year (on his death, and his birth anniversaries), I still feel like I have to write about him.
In the words of someone on Tumblr, "Give us back Jeff Buckley. We'll give you Justin Bieber."