AKA BRITTANY'S BOOK CLUB PART TWO or "are you thar, Marge? it's me, MOBY DICK."
also: Monsterpiece Theater. did anyone else grow up watching this? Twin Peaks, Waiting for Godot parodies. I remember watching the show but not these per se. I do not doubt I did encounter them and it explains why I am the way I am now. God sometimes I wish I was Oprah and one day I too will have my own network. STEDMAN, WHERE IS MY SIGN!
so I read a lot in 2010, one of my big accomplishments of the year. from holding On Chesil Beach at the hotel bar in Phoenix and watching the French people talk to Main Street in my disgusting Edinboro apartment to reading The Sun Also Rises outside a grocery store in blinding sunlight. memories!
I didn't get around to reading a lot of recent fiction actually from 2010, unfortunately. I would have loved to read Eating Animals by JSF but I could not find that ANYWHERE. so bygones are bygones. I ended up reading a lot of stuff from 2009.
best books I read
Main Street- Sinclair Lewis
oldie, but unforeseen amazingness. no wonder it was a best seller in like 1920 (right). a progressive librarian marries a doctor and moves to a small town where people look down on all her ideas and habits. it's so true about the nature of small town living and gossip and etc. I highly recommend this- Lewis' life went to shit and I always confuse him with Sherwood Anderson. shrug. ONE OF THESE MEN DIED FROM CHOKING ON A MARTINI OLIVE I JUST DON'T WHO.
Suite Francaise- Irene Nemirovsky
I meant to read this a long time ago but time and length and thank god for audiobooks! she died in the death camps of WWII and this was published a few years ago by her daughter. this is one of the only books I can think of, written about WWII during WWII. so it's not fantasy or based on research. this woman lived this, to the very end. there were so many times when I was listening to this I just had to stop and be like "holy shit, I'm so lucky." a book that can do that to you is a MASTERPIECE.
Lessons in Calamity Physics- Marisha Pessl
it was very wordy at times and so pretentious, all these fucking references, my god. but it was worth it in the end.
The History of Love- Nicole Krauss
not enough words for how much I ended up loving this book. you have to read this at some point; you just have to. I cried at the end- you can tell her and JSF are totally married. but it's so damn beautiful; I can't believe someone is capable of writing that well. Mira! you were so right!
The World According to Garp- John Irving
at first I was appalled by the frankness of this book. ejaculation! I don't want to read about ejaculation. do I ever write about coming? not really. what's with guys and writing about ejaculation? jesus I wanted to throw up during the first part of this book. then, it became a good book. like a really, really good book. you get to know the characters so well- by the end you feel a part of their world. I will say though he could have cut down on parts, but hey. it happens.
The Unnamed- Joshua Ferris
he writes insanely beautifully. like, I just want to call him, have him come over and read to me. BECAUSE HIS VOICE IS ALSO AMAZING (audiobooks! audiobooks!) and even my mother called him "dreamy" (I wish I was kidding). but the fact he writes like a beast: shit. also someone else drew these hearts of course I didn't do that. Joshua Ferris if you read this please marry me
I need someone 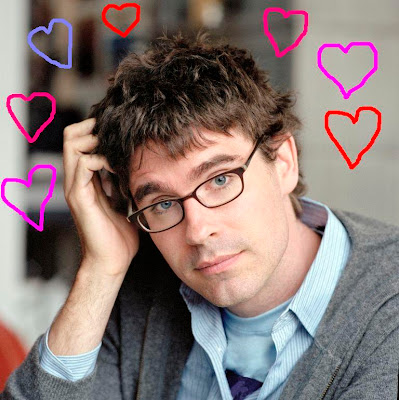 intellectually superior to me. oh, the book. a man that can't stop walking (it's a disease). it tears apart his life- it really does. however I will say I was slightly disappointed- Then We Came to the End was so amazing and the plot often rambles here.
WHAT LET ME DOWN
I like Ian McEwan a lot- Atonement was superb, Amsterdam was a good effort. but On Chesil Beach? damn.
also you know my feelings on Anita Shreve. must I repeat them?
I just finished Indignation by Phillip Roth, my favorite not dead writer. (Ferris is such a close second) so that's how I'll end 2010. in-dig-nation! oh more ejaculation references HOW PRECIOUS.
I never did read my The Unbearable Lightness of Being. I could not find it. :(
here is NPR's list of the best of 2010.
here is Woody Allen's the Whore of Mensa, which you need to read anyway.
"You hang on the wheel of fortune. I rise upward on angel's wings. You turn in the gyre. I dream of old lovers with youthful smiles."
Sorry, pal, we're in this together.
"Prove it!" he cried.
What is a wing? What is a smile?
"You can't be smart," he said. "Only I can be smart."
I'm evolving, replied the other.
- Joshua Ferris (oh hai)