(NO) love song for myla goldberg 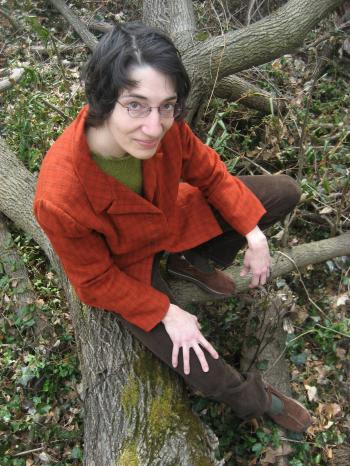 Remember how much Alanis' sophomore album sucked? Supposed Former Infatuation Junkie? and how nearly every other album she has produced has also sucked? me too. this was my introduction, so long ago, to the concept of the "sophomore slump." As much as I'd like to turn and pretend this isn't really an accurate idea, someone else has proved me wrong, again. Meet: Myla Goldberg.

yeah, that girl from the Decemberists song. who is a real person, as I found out over the summer, reading her very likable, very fine first novel, Bee Season. which was turned into a movie with the likes of Richard Gere and Juliette Binoche (!!!) in 2005. it's about a quirky Jewish girl with family issues who finds out she excels at spelling bees when she thought she sucked at everything. I know what you are thinking, friend. You are thinking "Brittany you just described my life." I know, friend. I know. I particularly love spelling bees. I ache for the day I can host one and ask a sweaty seven-year-old HOW DO YOU SPELL (the name of the devil from Faust).

So I thought, seeing that Bee Season struck a chord with me, Wickett's Remedy would be somewhere along those lines. Like I was when I read the second JSF book, Extremely Loud and Incredibly Close. Now don't get me wrong, I love JSF. But do you know what these two writers have in common besides wearing glasses and being Jewish? I couldn't really stand their sophomore efforts.

Wickett's Remedy is set in WWI-era Boston, focusing on the 1918 Spanish Flu epidemic, which killed people primarily in their early 20s. And the protagonist, an Irish working class girl named Lydia, is engaging and powerful and well-developed. This is the shining point. The rest of the novel gets lost in this web of fact and experiemental side stories, which are overall distracting and demeaning. Except the chorus of voices, of the dead, which often chime in to correct Lydia's mistakes. The excerpts from a soda club's PR letter? well, I don't read that stuff in real life fo a reason.

Myla! How you disappoint!

Luckily, she released her third novel, the critically lauded The False Friend, this year. So I will give her another chance, unlike Alanis. Goldberg is a talented writer that can produce some beautiful phrases, some wonderful passages and it's admirable the risks she takes. This being said though, by the end of the story I was so so so ready. The middle was by far the best. Lydia's tragic marriage to the Niles Crane-like Henry was so gorgeously worded. But the end.....

I have since moved onto Loving Frank, which I don't think I will finish (even though it's an example of strong historical fiction and a great primer to Frank Lloyd Wright, who I knew virtually nothing about outside of him being probably the most famous architect ever and his houses in Pittsburgh and Buffalo) because I made the mistake of WIKIPEDIA'ing the girl the novel is based off of and what happened to her in real life upset me way too much. >_<

In conclusion, will Alanis ever make another good album? Why does the sophomore slump exist? We look to Jan Brady for scientific proof.

- Brittany (remember when I used to do this! don't mock me AWM I let you do what you want!)

June 01, 2021
If you're even vaguely familiar with the Phoenix music scene to any extent, you probably knew Andy Warpigs. I saw them a few times at Yucca/Time Out Lounge when I was frequenting both spots a few years ago. Andy Warpigs was one of the most ubiquitous names you could come across, and with good reason - they were an incredibly prolific and talented artist, basically a Phoenix legend.  Unfortunately, over the weekend Andy Warpigs passed away - an extremely tragic loss. If you can possibly donate to the GoFundMe to help Andy's mom with funeral expenses , please do so.  Take care, Britt
Post a Comment
Read more