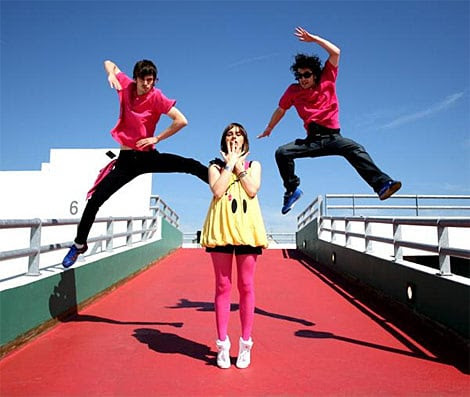 A few days ago, Yelle answered some questions for me. I shouldn't say Yelle though because that is to generalize and say Julie Budet is the whole band. Yelle is the band; Julie Budet the awesome singer who I talked to. THERE IS A DIFFERENCE! that's like saying "omg I talked to Garbage" when you only talked to Shirley Mansion. I know there are boys involved! somewhere!

In case you did't see my post a few months ago, Yelle is back at making music, releasing "La Musique," which is a lot of bombastic fun. it sounds like spaceships and the like. when I listen to it, I want to see lasers. which I think sums the aesthetic up nicely! The first album was 2007's Pop Up which is such a good album, featuring the likes of the !!!! "JE VEUX TE VOIR."

the new album is to be all in French (no surprise) and comes with a tour, which includes shows with K. Perry. of course though it's only going on in Europe right now. check your local listings, Europeans. you lucky bitches.

so here is my Q/A with Miss Julie. observe.

1.) What inspired your new album? Actually what inspires you in general?
For the new album and in general, our life inspires us. We were touring for almost 3 years and we met lots of cool people around the world, discovered countries and cultures, but also new bands or old songs and after that we took the time to rest at home with families and friends and think about what happened! We are still talking about relations between boys and girls, love etc.. but in a way more deeper than on Pop Up. And for the music, we were listening lots of different sound, Etienne Daho for example, a french singer, or Chagrin d'Amour a band from the 80's, and Depeche Mode or Phil Collins.. and more!

(p.s. Phil Collins has a new album coming out and it's going to be all rock! 2011 will be interesting).

2.) You're currently on tour! Any plans to expand the tour through North America? (I am biased!)We'll be back in US normally for spring with our new album (out in March) and a bigger tour!!


3.) You collaborated with Robyn (I believe) a year or so ago. Who would you like to collaborate with in the future? You ever going to tour with Robyn? you should!
I'll be very happy to work with Dave Gahan (Depeche Mode), and maybe Damon Albarn (Gorillaz, Blur), i was totally in love with him when I was a teenager!!
I'm very proud of the exchange with Robyn, I love her new album(s) but no tour with her for the moment!

!!! (I'd like to see her do something with Gorillaz. would be cool.)

I'm very very very excited for the new album, even if I'm scared too! I'm really excited to tour again in US and to see how people will react to the new songs! And right now I'm excited because it's almost Christmas!


well, she shouldn't be scared because it will probably be awesome! and merci to her for doing this.

also, I hate asking questions about inspiration because they make me feel like Drew Barrymore.


and as always: I never took the photos.