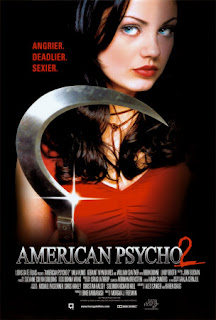 Once again I journey back in time,
and here is the review of American Psycho II starring Mila Kunis.

Anyway, I could take an approach to this film that I have done with many of my other reviews and just summarize the plot with a few notes, but since this is Mila Kunis week, I will take a different approach and illuminate what this film has to offer.

Mila Kunis strutting across a college campus in black leather with A LOT of attitude,

William Shatner getting pimp diesel with quite a few undergrad women,

Mila Kunis strangling a man to death with a condom,

And the name of director Morgan J. Freeman,

Then, this film is for you.

This was a film that so clearly had its pros and cons. There were things I liked, and things I did not like almost right down the middle. It falls just below the median because overall, I just could not take it seriously. Even if the intention was comic thriller, I couldn’t accept it as a legitimate movie.

BUT on another note, something that needs to be taken into account with this film is the image of Mila Kunis, who is of course playing the “American Psycho.” From the establishment, I could not believe for a second that she was a serial killer, and that is the whole point of the movie. They really made Mila have the deceptive superficial look of a smooth face with no dark twisted interior at all.