Dating in the Islamic World

February 10, 2011
For all those of our readers who are Muslim and thinking about a girlfriend or boyfriend for your valentine........

I am now living in the Arab country of Algeria, and life in the Muslim world means one thing.
Privacy is hard to come by sometimes.

The other day I had journeyed into a small clearing in the local landfill to practice my French rapping skills, and a man suddenly popped out of a tiny crevasse. He introduced himself to me and asked my nation of origin.

Once he learned I was American he journeyed back into his little dirt hole and returned with his girlfriend whom he was having a picnic with at the time. (And no, that is not a metaphor for something else. It was a real picnic.)

I had discovered an Algerian make out hole.
The two people then invited me to join them on their picnic and they even gave me a chicken sandwich and a Gucci keychain as a souvenir. Since then, I have noticed pairs of two heading down this little path toward the clearing in the dump for some TLC and PG-13 behavior.

This is the path to the Make out Hole. 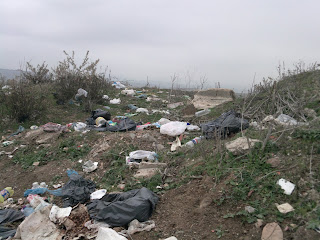 Here are some tips for dating in the Muslim world.

In Algeria, if you want a functional unmarried relationship, you have to go where there are no people i.e. the local dump or a bookshop.

If you live in Iraq……..you would have to hide from gunfire and shell fragments.

If you live in India……….meh there are a billion people there, no one will notice…so crowded it is private.

If you live in Turkey…..just become an internet stalker like everyone else.

If you live in Morocco……well, there are so many ho*s in leopard print, you really wouldn’t have to hide from anything. It’s practically la mode.

QATFYG:
Have you ever had to sneak around?
And what are your thoughts on leopard print?