from Russia with love. 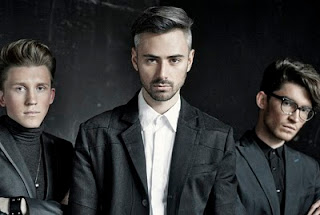 There are a few bands I know of from Russia. highlight: a few.

- TATU (all the things she said and bad Smiths covers, no?)
- Tesla Boy

In addition to being a band, they also remix a lot of stuff. Billy Ocean, Sally Shapiro, Anoraak. and they're quite good at it, too. some guys have all the luck. they're fairly popular in their native country and the rest of the world is taking notice. they played the EXIT festival in Serbia last year, which is a huge deal, apparently. I say "apparently" because I don't know much about Serbia.

last year saw them release their debut album, Modern Thrills. if you can order a copy of this or stream it you MUST. seriously, especially the tracks "Rebecca" or "Thinking of You."

2011 certainly seems like it will be chock full of great possibilities for this up-and-coming band. I got to ask them a few questions via the magic of the interwebs, which is a beautiful thing:

on popularity:
"Popular" is a really strong word to say. We've just made our first steps and there's a high stairway ahead.

on the endeavours of 2010:
We finally realized that our band is the most important thing in the world to us. We did a great deal of work and going to keep it on. 2010 was a year to tour Russia and the nearest countries. And according to the feedback we've got from Europe and both Americas, we're going to make some showcases there.

on the music scene in Moscow: (I was curious!)
It's too early to talk about the music scene here but there are some really great bands and musicians all over the country. We do know you'll hear about them soon enough! Just keep your eyes focused on good old Russia.

on the year ahead:
Now we're writing and recording some new stuff, but it's too early to talk about new album, we're going to concentrate on touring more. But no worries, we'll treat you with some new songs this year.

Tesla Boy is doing a gig with Hurts in April in Russia. I asked if there is ever the possibility of collaboration there:
Why not if they are ok with it.

and, finally, on their name (NIKOLA TESLA):

It was that song called "Tesla Boy" written by Anton. It's about a guy who couldn't make love to a girl 'cause electricity's running through his veins and he electrocuted everyone who touched him. We thought that it's not only a great song but also a great name for a band. And, yeah, Tesla's a greatest guy in the world.


so there you go. Tesla Boy, give them a listen. they deserve it.