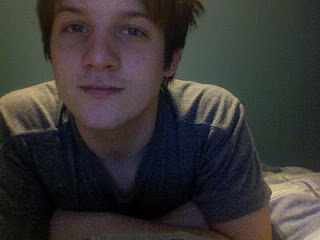 I'm holding off on my Chris Bell interview until I get his OK. I am not that big of a jerk!
p.s. CONGRATS TO MY FRIENDS IN ARCADE FIRE
my friend from Ohio, Matthew Morich, has been making his own music for a while now. what he does seems like it has a lot of potential, a lot of originality, which are qualities I respect. hence why I decided to ask him a few questions about what he's doing. I strongly urge you to click on the link to his youtube account at the end of this post....you won't regret it, really. have I ever been wrong? NO.
as you'll see, he uses his music to raise some interesting ideas and concepts. read on....
q: When did you start making music?
a: I started writing and recording acoustic stuff when I was 15 or 16. But my electronic project, neonsentient, began when I was 18.

q: Where do you draw inspiration from?
I was first inspired to make electronically-based music after hearing the song “Smell Memory”off of múm’s 2000 album Yesterday Was Dramatic - Today Is OK. I was inspired by moments in which timbres of sound shone through the music with profoundly emotional meaning, though I couldn’t tell quite what that meaning was.
I experienced the sound intensely as they spoke these beautifully encrypted messages and emotions and ideas, and it led to an important realization for me. A realization of the potential of electronic music as artistic communication, as communion.

I draw inspiration from all of the music that I listen to. I find myself drawn heavily toward dream pop, shoegaze and glitch music. Discoveries of several artists in particular have been major influences in the directions I’ve taken my creativity. I’m influenced a lot by Radiohead and its members’ individual projects, múm, Grouper, and other, more experimental artists like Tim Hecker and Fennesz.
The Smashing Pumpkins have also had a huge effect on me since I discovered them at age 13. Though I’m not religious I allow the icons and ideas of Christianity and other religious mythologies to impact the air of my music as well.

q: What exactly is neonsentient?
a: I used neonsentient as my moniker for a while. I don’t remember how I thought of it, but I decided to drop it recently, and let my own name represent my music for the time being. That might be changing again soon.

q: How would you characterize your music?
a: I would characterize the music I make mainly as electronic and psychedelic, but not exclusively so. Some of it carries a certain energy, a kind of desperation, an urgency, I think. With some of my writing, I can take an approach that I consider more playful, but the music itself always ends up holding something a bit heavier than that within it.
I think there’s a certain degree of intimacy and femininity that is naturally present in my writing style. I strive to make music that is raw, soothing, unnerving, sometimes simultaneously. Sensuality and emotional impact are usually what I’m shooting for.
I prefer to leave a lot of the messages in my music up to interpretation, whether sonic or lyrical. I like to think that someone could listen to a piece of my music in a certain mental or emotional context, and get a certain impression from it, and then hear it again on a different day and be taken in a totally different direction.
And that’s the point, I think, of making a music that can be labeled as psychedelic. That it reflects and takes on the face of something inside the listener. While some of my music is energetic, a lot of it is sleepy. But it’s always meant to be absorbed. I’m a firm believer in a holistic approach to music-listening. I think the music I’ve created represents a pretty wide spectrum of images and ideas, and if I can make you feel secure or anxious or sexual or forlorn, or make you wonder about anything at all, then I’ve accomplished what I set out to do in writing it.
(that is something I personally really like)
q: Where do you hope to go with your project?
a: I’m not really sure at the moment. The work I’ve been doing has been really sporadic with school in session and everything, so I haven’t been finishing many songs lately.
But still, I think I’m constantly evolving as a songwriter, and I have been putting out some demos, just on YouTube and Facebook and stuff.
So I guess my plans for this project are to just keep doing what I’m doing, and keep putting my music out there!
Matthew Morich on youtube