The Future of Two and a Half Men 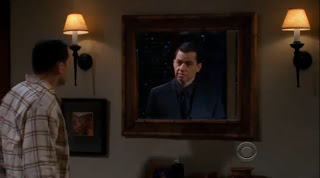 With Chaz Sheen out of the picture, things are sure to get mixed up, that is if the show continues at all. Could they replace him with John Stamos? Maybe, but it's sure to tank the show. I say, why not flip the script altogether?

Over the course of season 8, Alan has become increasingly deranged, culminating in his construction of an elaborate Ponzi scheme and seeing hallucinations of his evil self in the mirror. Let's go further down the rabbit hole.

Maybe there never really was a Charlie Harper. Maybe Charlie Harper was just Alan's divergent personality. We could revisit Jane Lynch as the psychiatrist. John Cryer could play both roles as his illusion of reality continues to collapse around him. Maybe Berta is really his wife, and Jake their son, his "ex-wife" really a neighbor he clandestinely stalks.

If the show loses money, they could downgrade the set. Maybe they were never in Malibu to begin with. Maybe Chuck Lorre was never even really the producer. Maybe it was M. Night Shyamalan the whole time.