You can't spell 'Housewife' without 'Ho' 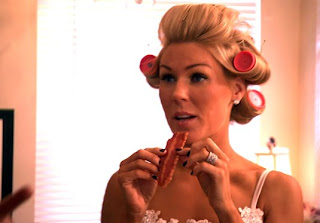 It is a truth universally acknowledged that a middle-class twenty-something possessing an HD tv must be in want of a program featuring mind-numbingly stupid and inexplicably rich blonde women in Orange County.

Look, I don't purport The Real Housewives of Orange County to be some kind of elevated medium from which we can all glean truths about human nature. In fact, 'nature' is decidedly absent from this show. But I have been watching RHOC since its first season and I am hooked. I am hooked like Dustin Hoffman c. 1991.

After talking this over with bkemp, I have just decided to go ahead and start a new column, celebrating/making fun of the Real Housewives of Orange County. I simply cannot hide my love any longer.

Now in its sixth season (Jesus Lord in Heaven, I have been wasting my time for SIX YEARS?), the only remaining original Housewife is Vicki Gunvalson, she of the 'WOO-HOOOOOS' and hypercritical micromanagement. Get it, girl. She is the breadwinner and has provided everything her family has. But instead of being cool about it, she reminds her family and her viewers all the time. She freaks out about everything and is oversensitive and has control issues. I like to think of Vicki as my Id.

(Past cast members include Lauri, who was rich, divorced, was poor, then remarried another rich guy; Jeana, who was a playboy model in the 80's and perhaps the most level-headed - AND A BRUNETTE; Tammy, whose daughters look like strippers; and Lynne, whose kids talked to her like it was the Antebellum South and they were the ones with the whip hand.)

Tamra probably clocks in second for Housewife longevity. She was married to Simon, who also has control issues (huh!) and liked telling her what to do and putting her in her place. Is it just me, or is being married in the OC a lot like being married in the OT? (Starting with Slade and his 'I want Jo to just stay in the home while I provide for her,' the men in Orange County seem a little obsessed with gender spheres.) Their marriage hit the rocks last season, and I guess Simon served Tamra some divorce papers while the show was on hiatus. Cuz she's dating a Latin lover. More on that later!

Speaking of things Biblical, Alexis is the self-described 'Christian' Housewife. I think she might be the one whose superficial enhancements suit her best. By which I mean, Alexis is legitimately good-looking. Alexis has an annoying penchant for bringing up her religion all the time. But she seems to have a good heart and good intentions. Also, Bryce wants to have sex with her. I don't blame you, Bryce.
Let's see, that leaves Gretchen, who is from Texas apparently. You know, I was reading The Help, and while following one of the characters, I can't help but think that this is what she looked like. Big blonde hair, big boobs, tight clothes. Gretchen also might take the cake for Dumbest. Let me elaborate on that dubious distinction by saying that is a lot like Hitler beating out Stalin and Pol Pot for Most Evil Dictator. Oh well, Gretchen couldn't hurt a fly! And that is because she probably only weighs about 90 lbs, 50 of which are hair extensions and Aqua Net.
There is some new lady on the block, too, Peggy? I dunno about her. She seems devoid of personality so far, but that's because we haven't yet seen her get into a fight with someone.
Let me recap the first two episodes of the season: Tamra invited Gretchen to a trunk show at her boyfriend's house (his name is Eddie). Gretchen rolled in with an entourage and said some generally rude things. I think this stems from when Gretchen was engaged to an old guy with a terminal illness (snarkiness aside, he seemed like a really nice, loving man) and she went somewhere while he was in the hospital, so Tamra made a nasty remark about it. And it's like there's a completely empty, sealed white room, and you say something and the words reverberate off the walls forever and ever and never come to rest. And that's kind of what goes on inside these women's heads.

In the second episode, Vicki takes her daughter Briana to Seattle for an insurance conference or some such thing, leaving Donn at home with their dogs. Heh. We meet up with Peggy, who flaunts her younger husband and goes to the shooting range in a top reminiscent of something I once saw a porn star wear on the Howard Stern show late at night. Peggy and Alexis have a little competition going on between their kids; they take them to the park and try to one-up each other, while privately interviewing that there is no competition whatsoever. Nothing is sexier on a blonde than denial. Oh, and Gretchen can't stop talking about how she's nailing Slade. (Slade, by the way, started off with Jo in season one, moved on to Lauri before George snapped her up, and has settled with Miss Texas.) Gretchen, we get it: you're having sex with Slade. Every Housewife, it seems, has at least one thing she feels it necessary to reiterate. It's easier than trying to come up with new thoughts.
Last night's episode was a doozy!
Alexis, Peggy and Gretchen go shopping. At least two of them tried on thigh-high black hooker boots...but who ended up buying them? I don't know. I only know that over dinner, they start spilling sexual secrets. At this point, Bryce, who is forced to watch with me every Sunday, shifted expressions from 'merely bored' to 'marginally interested.' Then Gretchen says something like, 'Slade's penis gets bigger or smaller depending on my mood.' Texas, you WOULD go there. Alexis and Peggy talk about doing it in the closet with their husbands (Peggy: We did it in the closet. Alexis: We've done that a bazillion times. ...ladies, this is getting a little unhealthy, don't you think?) Also, Alexis reveals that her husband lets her tie him to the chair and blindfold him. Uhhh
Then everyone went on a trip! Alexis and her husband went to San Diego with their three kids. I was telling Bryce, that husband of hers has it made. His wife is smoking hot, financially dependent on him and believes that because the Bible says a wife is subject to her husband, she must bow to his wishes on all things. I'm not saying it's right, but I think there are a lot of men out there who would go for this arrangement (one is on Erie Craigslist!). And I almost kind of admire him for being able to brainwash another human being like that. Cult leaders could learn something from him.
Mr. Alexis, who doesn't seem fond of children, takes a car separate from the family SUV, because Alexis packed 10 suitcases for five people, which he thinks is hilarious. Also, the first thing he does when they get to their villa is have the bellboys remove an offending leather chair. Well geez. Might as well yawn and say, 'Too tired tonight, babe.'
You remember that part of A Christmas Story where the narrator reveals how his mom hasn't had eaten a bite of dinner in years? That's what happens at the Alexis family breakfast. It was both funny and sweet, because she clearly loves her family and can find the humor in the situation. But she is also setting herself up for a Black Swan Breakdown.
Gretchen and Slade visit some friends in some city that is super hot in the summer. Gretch reveals that she's not really the marrying type, or at least not yet. Cue Slade and his 'the record scratches to a stop' look. Gretchen imparts some wisdom comparing marriage to owning a car, and it's actually very '15th century merchant with a biddable daughter' of her. Slade, how has it come to this?
Oh, and then Tamra gets it on with her new boyfriend in the bath tub, after they go out to dinner with a mutual friend and make out in front of him while he's trying to have a conversation. During a voice-over, she sighs over dating a younger man. It turns out he is five years younger. Ahem. Also, she is 42, which makes him 37. That's not really what I would call 'younger' but we all have our little vanities, don't we?
Back at someone's house, Tamra calls Eddie into a room, which is dim and lit only by candles. She is in the tub, swishing her legs around.
He just stands there and says, 'You're naked.' Incredible powers of intellect! Then he grins like he just nutted in his pants, and he who was on the fast track toward being the King of Obvious needs to have his invitation to join her spelled out.
('I'm very naked,' she responds. IT WAS SO MUCH LIKE A PORNO!) Except unlike the stuff on redtube, all we get is her blurred-out fake titties bobbing in the water and an unfulfilled aching in our loins. Real Housewives of OC, you do me so dirty.