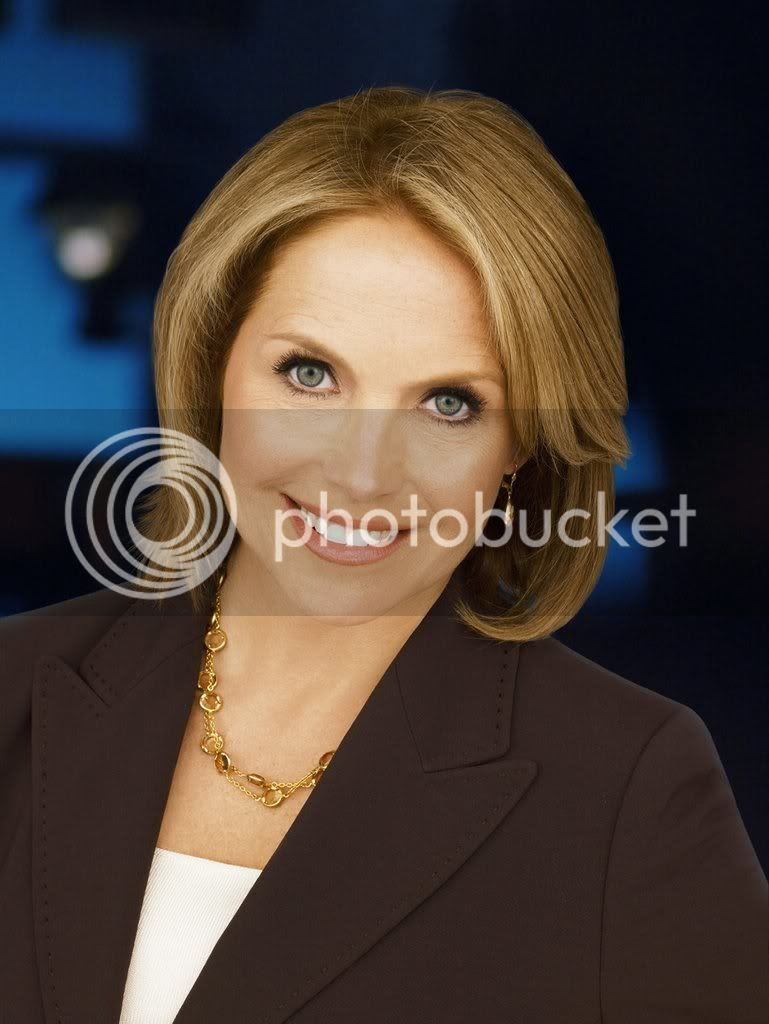 okay so it's well-known by now in some circles the fondness I have for current television news anchors. I mean, I'll be frank with you, right now it's all about Diane Sawyer for me. I love her. not in a creepy "I want her" way- although she is a beautiful older woman- she just calms me. I want to hug her and have tea with her. that kind of way. but Katie was my first love. Katie was the first person that I saw on the news who made me feel like despite the world falling apart around me, it would all somehow work itself out. the knots would come undone- the sky would not cave in. I would not be killed by anthrax or a hijacked plane. get what I'm saying? Katie was very much a big part of my life in the years between being 9 and 15. When I got to high school, the morning show love affairs stopped. I couldn't watch Katie and Matt and Al and Anne anymore. God I bet other people have the same memories I do. I remember Al when he was still fat; I remember when Joan London and Charlie Gibson were on Good Morning America! sigh but I also remember when Dan Rather landed his silly ass in hot water back in high school. I don't remember what it was about, um, comments about Bush, maybs (I hope that catches on)? then Katie had to abandon the Today Show. and my heart went broken, because we had magical summer vacations to keep each other company on. Iraq, Afghanistan, color terror alerts...oh I remember it well... then, in the stairwell at McDowell Senior High School, in 2006, when I heard Katie was on the evening news. I knew then this could either go one or two ways. I mean, Katie Couric on the evening news may have worked, but let's face the age-old question, almost asked by Frasier once: WHO WATCHES CBS? forgive me, forgive me, ghost of Murrow, but I never watch CBS if I can avoid it. and I think that's what did Katie in- she went to the weakest of the three major primetime news shows. now I think she did commendable work on CBS, but once I discovered how wonderful and sincere Diane Sawyer was (I mean there is something about the news anchor a la the impeccable Mr. Gibson before her, who would cock his head lovingly at the screen with his eyes pierced RIGHT at you, like "and I hope you have a good night"- aw, it reduces me to goop inside!)....my love affair with Katie dwindled. so now she's bon voyage and shit and no one will still watch CBS, save for the occasional sitcom and whatever weirdoes watch NCIS. the rumor mill says: Katie is eyeing an afternoon spot. you know why this is? because Oprah is going off the air! derrr! she's not dumb. I personally think she could be the next Oprah, but in the respect she'd have a respected talk show...I sincerely doubt she'd try to take over the world a la Oprah. I don't understand why ever when I'm angry my ipod subjects me to the Carpenters. shut up Karen, this is no time for you.

question: WHY DO BIRDS APPEAR WHENEVER KATIE IS NEAR?