April 24, 2011
So, I know you're all probably heart-broken that the RHOC thing fell through; I can't even remember what day that show is on now. Oh wait! Sundays. Huh.
My main MO in life thus far has been starting things and not finishing them, so GUH-BUY Gretchen. I'm moving on/up.
I bring you now a secretive secret of secretion (...): the royal wedding of Henry VIII and Anne Boleyn.
Here's what you probably know:
Henry VIII needed a male heir, his first wife, Catherine (I persist in the 'C' spelling because her name would have been 'Catalina' in Spain) of Aragon was pretty much spent (something like four or five pregnancies, two miscarriages, a stillbirth, a prince - born on New Year's Day - who lived for a few weeks before dying and one child who made it to adulthood - Queen Mary I), HenHen was dicking around with Mary Boleyn and then her feisty, witty sister Anne showed up and the royal lover was smitten. Fast-forward six years, Henry has completely changed the course of English history (and religion) forever, executed some of the most respected/learned/religious men in the country and finally slept with/knocked up his mistress. And then the baby turns out to be a girl (o noes) and it's all downhill from there. All = Anne's head.
What I've always found to be interesting about Henry and Anne is the fact that this woman captivated one of the most powerful men in the entire world at the time for six whole years and she did it mostly with brains. Learned women were not, of course, extraordinary, but the will to use intelligence with the force and ambition of a man - well, was. Plus, according to Alison Weir, who wrote a big ole book about the Six Wives, Anne was neither terribly attractive by the standards of the time (her fair-haired, light-eyed sister was), nor considered very beautiful regardless. I have included a portrait below, done in the 17th century, which is my favorite, because I think it captures Anne in her youth - probably in her best looks - looking like an interesting woman, for sure, a woman with a captivating stare, definitely, but not a beautiful woman. 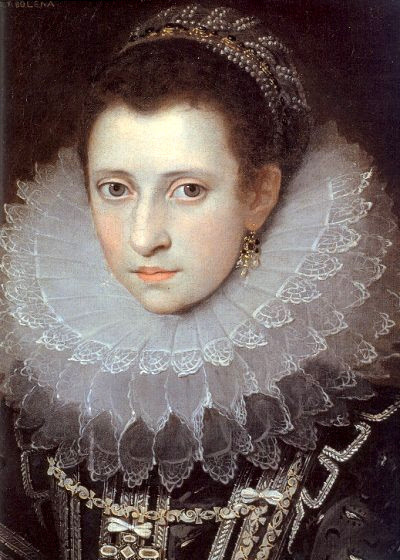 (Like the Real Housewives, a real dog can get fussied up and look expensive, even if she doesn't necessarily look attractive.)
Catching a husband at that time was one thing, especially with no fortune or great dowry (like Anne's situation). Persuading a king to potentially bring civil and foreign war to his country for the opportunity to sit at his side, enthroned? Unheard of. Horrifying. But that's what Anne did.
Also interesting are two little detours on the way to total Henry-Domination. One, the reason Anne was brought back to England from France to begin with, which was to marry her cousin and settle a title dispute within the family. Two, a may-have/may-not-have betrothal, with consummation, between Anne and the heir of the Northumberland dukedom, Henry Percy. Fascinating to wonder what might have happened had either of these relationships stuck.
Henry and Anne took a trip to France in 1532, at which time most courtiers assumed they would marry. Evidence suggests they did not, but that shortly before this, they had begun sleeping together. One might muse, which came next: marriage or baby?
Elizabeth I was born in early September 1533, which would put her conception around late December/early January. Christmas was a very festive (albeit sacred) time at Court, with lots of parties and feasting, and one presumes, SEX. Would her signs of pregnancy be enough by, say, mid-January for Henry to finally throw caution to the wind and take a second wife (technically before his first marriage was dissolved)? Or had Anne found some other way to persuade him (probably the promise of a baby soon to come)? Or had Henry finally had enough, and with the exuberance of a man who has finally gotten laid (amirite?), he finally was like IMMA PUT A RING ON IT?
We don't know. There was, according to Wikipedia, a secret first wedding, sometime in January. Then there was another secret ceremony on January 25, 1533 (secret, but more official). They were quiet affairs, hushed-up, and the only witnesses were very close friends.
It's rather ironic to me that the woman whom Henry VIII loved most passionately and most violently (literally) he married with the least amount of fanfare. I imagine them kneeling before the priest, their eyes turned up to God, joyful (Henry) and smug (Anne) in their triumph over an old world and an old order.
Upon her marriage, Anne became only the second woman of non-noble/royal rank in England at that time to be crowned queen...and there were a lot of queens before her, stretching all the way back to William the Conqueror's bride, Matilda of Flanders.
I wonder what place in that line the lucky, intelligent and beauteous commoner Kate Middleton might hold?