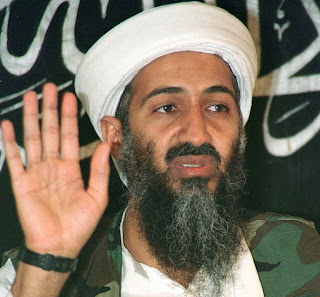 With the Lion Sheik gone, US government personnel have been able to move on to new and progressive things, like tracking down the second shadiest Eastern derelict with an appetite for destruction. However, for an entire generation that was defined by 9/11, the fact that he's gone is just, well, strange.

Where do we stand in a world bereft of an absolute icon of evil? Sure, there's still the Microsoft Word paperclip guy, but even his appearances are now fewer and further between. His death brings about as many questions as it does answers. Where are we going to find another villain whose name rhymes with Obama? Who will college students photoshop next to Bert from Sesame Street or onto magic carpets?

Ever the consummate search engine philosopher drunk, I once posed the question to Google, "What if bin Laden is hiding because he's shy?" Strangely enough, it turns out he was:

* Osama was an extremely shy child, Coll writes. He was an outsider in his new family but also the golden goose. His allowance and inheritance was the source of his family’s wealth.

We think of terrorism leaders as hard and intimidating. Bin Laden was gentle and soft, with a flaccid handshake.

Hard to believe OBL was a guy who left you hanging with the ol' wet noodle.

He also evidently had a bunch of nicknames:

* His admirers have referred to him by several nicknames, including the "Prince" or "Emir", the "Sheik", the "Jihadist Sheik" or "Sheik al-Mujahid", "Hajj", and the "Director". The word ʾusāmah means "lion", earning him the nicknames "Lion" and "Lion Sheik".

And what about that sexy niece of his, Wafa? 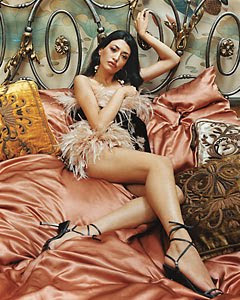 When they pull his phone records from Verizon, I think we can safely expect to see a few messages like, "OBL, put in the good word for me, man." God is great, after all, and his majesty is evident in those legs.