I Saw the Devil: Another Korean Film Review 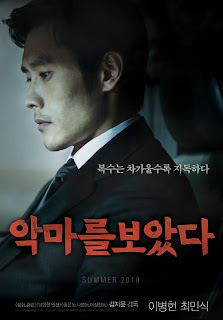 “I Saw the Devil,” is a name that is popping around the United States. It has made it’s way from Korea via satellite, DVD sales, and theatrical input.
In other words, it is out on DVD and in select theatres.

However, this film is more like a gory psychological satire that slaps you in the face.
If you are not comfortable watching blood, turn your player off or go to the theatre with someone that is comfortable with you burying your face in their shoulders, because this film is covered in gory, mutilating scenes of masterful bloodletting.

To get deeply into the heart of the movie, this is a mental chess game between two men. It brings up the classic idea of a man trying to avenge his lost love at the hands of a living monster. But things get outside the traditional framework of an ordinary film.

In just over two hours, you can see fight after fight between two men that display strength almost beyond the capabilities of man. The two men battling it out remind me of that line from the Joker in “The Dark Knight.”
“This is what happens when an unstoppable force meets an immovable object.”
Who can win?

One critic has declared that this film dehumanizes women, and although, there are scenes of women being tortured, and the principle characters are men, it is almost preposterous to say this film devalues anything about the status of women. The Antagonist is caught up in perverted sexual crazes,and because of that his victims are female. But on the other hand, he also kills and destroys lots of men, and there are no complaints that this film devalues men.

The only thing I wanted more from was the assertion of good and evil. It is clear that the antagonist is the embodiment of evil, but I felt it was not clear if his counterpart was the representation of all things good, representation of humanity, or even something higher like an angelic being. The film begins with a scene of angel wings on a car windshield, but we don’t truly get to see if this is supposed to be Good vs. evil, or evil vs. humanity, an Angel vs. the devil, or humanity vs. the devil.

But as for humanity, in the end you will find lots and lots of emptiness. This film is a quest for revenge, and all it does is lead to more emptiness and tragedy.

QATFYG:
What would you do if you saw “The Devil?”
Was Linda Blair actually possessed?
And
Does revenge feel good?