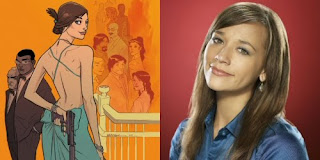 As the twilight falls onto Wednesday evening, I bet you are already thinking about Vampires because I wrote the word “Twilight.”

This is by far the worst way to introduce Rashida Jones.

I shall try again.
I first encountered the name Rashida Jones from her work on “Boston Public.” As I mentioned in a post a long long time ago, I was quite the routine “Boston Public” fan.
It is too bad I have not caught more of her work on “Parks and Recreation,” for that seems to be a favorite among people that I know. Of course I have seen her stuff on “The Office,”

And in news that is more exciting than Brenda Song’s mouth, Rashida Jones the actress-comic book writer has sold her rights to her comic book “Frenemy of the State," which chronicles a socialite that gives earns some Respect from the CIA. This is going to be huge. Like HUGE!!!

Here is a link to her comic book info.

QATFYG:
What actress would be a great comic book character? (Pam Anderson already tried it) (I think)

What do you think of Brenda Song’s mouth?