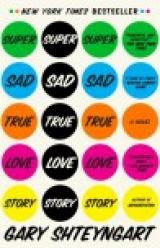 The Chinese are coming to collect past due debts, along with the Norwegians, the Saudis, and just about everyone else. It' chaotic, with National Guard armored personnel carriers and private contractors (think Blackwater and Halliburton) fielding their own quasi armies. The Democrats and Republicans have morphed into one political party and the country is engaged in yet another feckless foreign war, this time in Venezuela. This resonates today with our stealth campaign in support of the Libyan "rebels."

Lenny works for Post-Human Services -- a division of one of these companies, Staatling-Wapachung -- which attempts to provide immortality to the very rich -- High Net Worth Individuals (HNWI), as opposed to everyone else, Low Net Worth Individuals (LNWI). Not all the HNWI applicants for immortality qualify on medical or other reasons. LNWI need not apply, needless to say.

Lenny's just returned from Rome, where he's had little success in convincing Italians to sign up for immortality, but he's had a good time -- a good time about to come to a crashing end as he arrives in New York City to find that his desk in a former synagogue that serves as his firm's headquarters has been taken over by a younger person. But Lenny, the eternal optimist in a decaying city and country, counts on his friendship with his mentor, sixty-something Joshie Goldmann, who runs Post-Human Services and is a client as well.

In Rome, Lenny met and fell in love with Eunice Park, a super attractive recent graduate of Elderbird College with a major in Images and a minor in Assertiveness. He urges her to move in with him, rather than returning to her family home in Fort Lee, NJ, where he perceives that her podiatrist father is an abusive husband and parent to Eunice and her younger sister Sally.

Lenny and Eunice are an odd couple indeed, with Eunice a totally wired person addicted to her personal digital device, called an "aparat" (with Scandinavian-like double dot accents above the "a's" that I can't figure out how to make on my computer.) Lenny has an old-fashioned wood-grained aparat, which he soon abandons for the latest model, but he's addicted to old fashioned dead-tree books, having a wall of them in his one-bedroom Chinatown co-op apartment. Books in this post-literate world are called "printed, bound media artifacts."

Not long after Lenny and Eunice settle down in his co-op apartment complex where most of the other residents are retired elderly Jews, riots break out in Central Park and Tompkins Square Park and heavily armed security provided by Wachtung Contingency is necessary for Lenny to make his way uptown to work or to visit his parents, Boris and Galya, on Long Island.