A Short Conversation with Sara Zarr 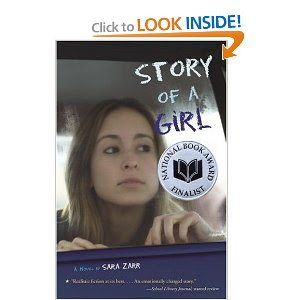 So I encountered the novel, “Story of a Girl” by Sara Zarr at my local library because the title instantly threw that song into my recollection.
I picked it up, and I saw that the cover read “Ages 14-17.”

So believe it or not, I got a real kick out of this book.
It takes you into the life of Deanna, a girl that has her life transformed based on one thing. At the age of 13, she gets caught having relations with a teen named Tommy of 17, who happens to be the best friend of her brother, Darren.

The novel really goes into how her life is slapped around, and she bears the label of Promiscuous like a scarlet letter.

So with this novel, I felt it was very creative and well-written; however, there was one sort of feeling that really stood out to me.
The MEN!

We have
Tommy – The somewhat badboy type, who robbed Deanna of her maidenhood.
Darren— The older brother and father of one, who is searching for stability in his life.
Jason—The well-spirited best friend that yearns for romance with a touch of a wavering attitudes.
And
Michael—Deanna’s boss at a pizza restaurant, former Stanford student, and on many different spectrums of life.

I will explain as I discuss this with the author herself, Sara Zarr.

NB: My name is Nader Boulberhane, and I am a writer for The Useless Critic.
At the end of my posts, I add QATFYG. It stands Questions and Thoughts for You Guys.

I read "Story of a Girl," and I was a big fan. I am a 23 year old male, and I thought it was very entertaining and well-written.
There was just one thing that bothered me...bothered me in the sense of Gray Area.
QATFYG:
How were you intending to portray men in this novel?
I almost felt the novel goes out of its way to make men appear selfish, weak, or "only got one thing on their minds."

Thanks for the question.
I never set out to portray any group or type of person any particular way - I just try to stay true to what I think is right for each character, male or female or teen or adult. Do you think Jason, Darren, and Michael are weak, selfish, and only after one thing? Because I think those characters are great guys! I actually even kind of love Tommy.

NB: Well, I love (the character of)Michael the most, but I felt with Darren he was showed as insensitive. Personally, I did not like Tommy. I think you crafted a brilliant character, but he is not someone I would be friends with in my daily life. I hope that makes some sense. For the sake of the novel, it was very entertaining.
I just got vibes from Michael and Jason that they were portrayed as weak, but I guess your explanation about "not portraying a group in anyway (clears it all up)."
Okay, can I also ask you, what does Deanna value most?

Yeah, I wouldn't get too close to Tommy, either. But I like to think that as he gets older he's going to be a better man, maybe in part because of what happened with Deanna.

The other thing is - I'm very cautious about having any character (the major ones, anyway) be "all good" or "all bad" because people are not like that. So, yeah, Darren could be insensitive at times but ultimately he had his sister's back and was working hard to make things better for his future family.

What does Deanna most value...that's a great question. I think in the context of the book, her biggest value, or desire is maybe a better way to put it, is that home is a place that feels like home should feel. I don't know if that makes sense to you, but it I could articulate these things in any other ways, I wouldn't have to write the books. :)

This is a really fun novel. It has a touch of edge, and all the characters are really well-rounded with depth. There are also laugh out loud moments, and there are also "Oh my God" moments.

I was thrilled to write with Sara Zarr and discuss her book. She is really intelligent and friendly, and I can’t wait to read more of her stuff in the future.
Again, this is a novel that is really outside of my age bracket, and I think it takes a truly skilled piece of writing to appeal to widespread demographics.