June 06, 2011
Hello if you are anything like Jim Davis and Garfield, you are probably dreading this Monday like it was Montag fuer Heidi Montag.
Whatever that means?

AWM and I are going to revert back to revertion and insert some more metal where things out to be inserted (the sockets).

QATFYG: What are five metal albums that you need to hear before you die?

I am going to arrange this as five albums that are often neglected when it comes to metal. These are five that people often overlook or don’t even bring them to mind.

Big surprise I picked this one to kick things off. Cannibal Corpse has become such a legend in so many ways in the world of death metal, it would be only fit to begin with their demo that launched some of the most pure death metal guitar riffs and shriek-worthy vocals, such as heard in the song “A Skull Full of Maggots.”

Why this one? Because this sound of Startovarius is a sound that pushes the edges of metal genres, this Finnish power metal/speed metal band has so many great hits, and they never over use the same repetitive ideas, this album put out some music that really just entered into a sound that I had never really experienced before.

Ozzy Osbourne – Down to Earth

I was really caught in a mindlocking debate. Who to pick? Ozzy or Black Sabbath. Why did I pick the 2001 Down to Earth album? This album brings an unmatchable melancholic force to the Prince of Darkness. It just feels like a long long way from Blizzard of Oz. There is so much sincerity in this music. It is somber, but it captures the metallic guitars. This is a piece of Ozzy history that must never be forgotten. Ozzy made this coming off of Ozzmosis, an album that a lot of people slammed (but features the awesome song “I Just Want You”). This album just shows a strong side with well-composed music.

Halford is a on a metal list before Judas Priest? Horrifying! Nah, just kidding I love this album. I adore this album. I admit this is a little polished when it comes to metal, but so many bands try to emulate this sound. It features such great metal melodies like on the selected pick “Crucible” and “One Will.” People need to hear this because it is truthfully a style that so many bands and musicians want to replicate. 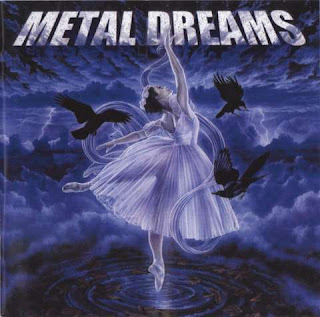 Lastly, I could not believe that this is the fifth and final album, I have to pick in “five metal albums you need to hear before you die..perdition...cold dark space,” but I pick a comp disk. I pick Metal Dreams Volume One. This series goes to show you how diverse and capable the genre of metal is. This brings in possibly the best ballad from Hammerfall “The Fallen One,” as well as my top song from Lacuna Coil “To Myself I Turned,” and it just displays the soothing side of inner darkness, gothic sadness, and recollection in music.

Korpiklaani – Tales Along This Road


I’ve mentioned this name on The Useless Critic a few times, and here it is again with my one of my favorite songs, their title track “Korpiklaani.” They are here because they do folk metal well. And to the person that didn’t believe me when I said Folk Metal was a genre of music, eat this for dinner, it’s meatier than your brisket.