June 10, 2011
So, I went to Coachella for the first time this year, right? It was amazing, for the most part. I only say for the most part because of something that happened the first night that had nothing to do with the festival itself. BUT ANYWAY. The third and last day, Death from Above 1979 performed. It was their first real show in maybe 5-6 years. I really wanted to see them even though I only knew one song, "Romantic Rights", and even that I knew vaguely because the friend that I was with at Coachella had put it on a mix she made for me and it was cool and everything, whatever. However, during their set the equivalent of a musical orgasm (aurgasm?), eye porn, etc etc occurred that made me reevaluate my life and changed my life for the next couple of months so far thereafter - I became OBSESSED with Death From Above 1979. Obsessed. Specifically with the lead singer, Sebastien Grainger. 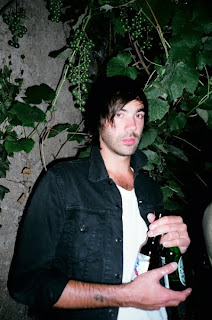 Hell, I even became slightly just as obsessed with the pornstache and the shittiness of fellow member Jesse F Keeler's slightly more popular side project, MSTRKRFT 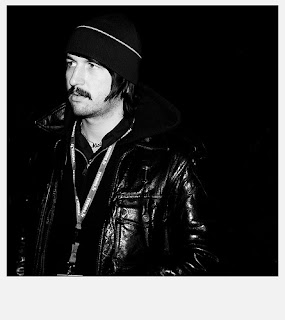 I'm just showing you Jesse's picture for now but, whatever.

Cue to about a month later when I read that the FYF Fest lineup will be announced soon. The FYF Fest is a mini, one-day Coachella occurring every first Saturday of September in the heart of Los Angeles, with rawkin' chillwave buzzbands, Hipster Runoff favorites, totally indie-looking douchebags, and a bunch of dust and absence of water running amok all over the place. I have never been, and would very much like to go this year. Then I saw this: 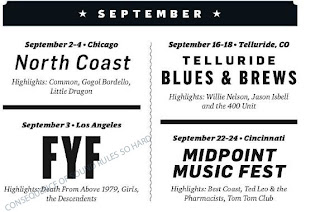 Apparently this is in the latest issue of SPIN magazine. Do you see that in the lower, lefthand corner? DEATH FROM ABOVE 1979! Oh, and Girls and Descendents, too. Descendents is one of my friend's favorite bands. The friend who I went to Coachella with and put DFA on a mix CD for me. This will be great. SPIN magazine has fucked things up so badly for FYF, but this is one faux pas I can live with.

Anyway, here are the clues they have given thus far:
The last two clues almost broke my heart but in a good way. I think we all know that conglomeration of number and letters that spell out a zip code could only be Canada, and upon further investigation, yes it is in Toronto. DFA is from Toronto. WHO ELSE COULD BE PLAYING AT FYF FEST??? BROKEN SOCIAL SCENE??......MSTRKRFT???

I am aware that this FYF Fest news will only be exciting and a couple of the clues will only make sense to indie music lovers in Los Angeles, but.......exciting nonetheless, right?