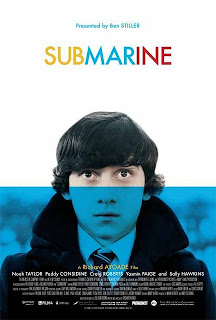 Alright, I think I'll be giving this movie a shitty review if I officially reviewed it, so a public service announcement: SEE THIS MOVIE. If it's playing in your area. Submarine is a little British indie film directed by one of my favorite (favourite?) people of all time, Richard Ayoade, a half-Nigerian, half-Norwegian comedian and blipster, most famous for playing hilarious characters on The IT Crowd and The Mighty Boosh. He's also directed videos for Vampire Weekend, Yeah Yeah Yeahs, and Arctic Monkeys. Speaking of Arctic Monkeys, their lead singer, Alex Turner, contributed songs to the soundtrack for this film. The film is set in 1986, but Turner's modern indie vocals fall in place perfectly throughout its vintage, twee Welsh setting. Ayoade's been called the next Wes Anderson. It's also his birthday today (well yesterday, since I'm posting this so late and it's almost midnight on the west coast)! Do yourself a favor and watch SUBMARINE.