Capital Cities: you need to hear this! 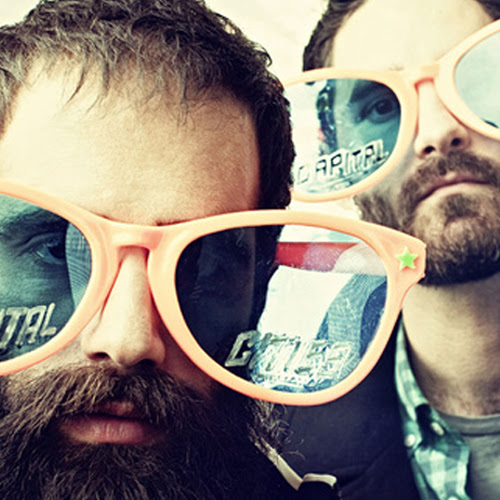 BIG SUNGLASSES ALL AROUND!


Capital Cities are pretty new and fresh in the music world. Meaning, their debut EP was released last June. But this band has been riding nothing but a wave of positive feedback since, and has slowly managed to COMMAND AND CONQUER the ever-fickle Hype Machine charts.


I managed to get a hold of band member (it's a duo!) Ryan Merchant for a few fast questions regarding their growing popularity, being from LA, dancing fans and what they're up to next. Being from LA sounds very exciting, I know. West coast = best coast (not the singer)


You guys are getting a lot of buzz these days! I see you all over my hype machine and last.fm. How do you feel?
Ryan:  We feel ecstatic! It's amazing to watch your music organically spread across the internet and connect with people in all parts of the World. When "Safe and Sound" went to # 2 on the Hype Machine most popular chart we were blown away. All of this activity makes us want to keep writing and playing as much as possible.
Your debut EP just came out in June. What was it like putting it together?
Ryan:  We spent a long time on this EP. All of the songs went through several transformations before we finished them up. It was challenging, but enjoyable. The best part about it was arriving at a cohesive sound that still incorporated so many different styles and sounds into the productions.

Who are your foremost musical inspirations?
Ryan:  Pink Floyd, Radiohead, Underworld, Royksopp, AIR, Michael Jackson, Stevie Wonder, Joni Mitchell
What's the Los Angeles music scene like, as of the moment? I say this as someone at the other end of the country.
Ryan:  It's hard to define the L.A. scene because L.A. is so huge. That said, we've been really impressed with bands like The Local Natives, Aloe Blacc and Foster The People. They all write great songs that are memorable, yet maintain a lot of artistic integrity. That's what we aspire to.
What are your plans for the future?
Ryan:  We plan on touring extensively and working on our debut album.
What is one thing people should know about your band?
Ryan:  There is nothing we enjoy more than seeing people dance at our live shows.
feel free to say anything else, I like you guys!
Ryan:  Our friend Simon Mills, from the UK electronica duo BENT, is releasing a solo album under the name Napoleon. We co-wrote and sing on two tracks. No specific release date as of yet.
many thanks to Ryan for taking the time to do this!
listen here:
so I have a feeling we should be hearing about these guys more soon.