A group sex review of "Friends With Benefits"

This is the result of a week worth of emailing back and forth between:


ALL OF SAW THE MOVIE OPENING DAY. I did this because I am partially in love with Mila, and how could I not? Also:  Cara had sex with Justin Timberlake at a concert in 2002. And Kurt is just a slut!


me:  "Friends With Benefits" was a great film, because not only does Mila Kunis get me wet, Jenna Elfman has one percentile of her acting talent still in tact. Did the Church of Science Fiction not manage to suck it all out? Who knows.


Cara:  HAHAHA REMEMBER WHEN JENNA ELFMAN SHOWED UP AS A STRIPPER IN CAN'T HARDLY WAIT?

me:  OH MY GOD REALLY WHY


Kurt:  Are we really gonna talk about Jenna fucking Elfman? I, for one, will not. Instead, I pose a quandary: Justin Timberlake sneeze/orgasm. Is this an actual thing? Is it adorable, or would it get super annoying? What if he's drinking something--OR what if he's going down on someone and sneegasms?!


me:  I'D KICK HIM OUT OF MY BED (note:  I have standards and don't want anyone to sneeze while going down on me)


Kurt:  Don't get me wrong (The Pretenders!), I would NEVER kick JTim out of my bed. Did you see that ass?! Was that his ass? I think so.

By the way, Mila Kunis totally had an ass-double. SHOW US YOUR ASS YOU BITCH
me:  I got wet because of that ass THANK YOU (note:  this did happen)
me:  also, how great were Emma Stone and Andy Samberg in the five minutes they both had? were you guys surprised this movie was as good as it was?
Emma Stone's best line of the film (about John Mayer):  HE'S THE SHERYL CROW OF OUR GENERATION 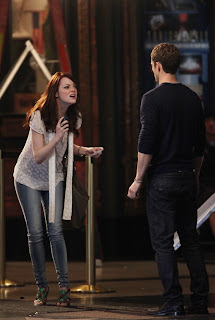 Kurt:  They were both great. Is it odd how Emma Stone is in every movie coming out this year? Deal with the devil? I think so. And yes, I was pleasantly surprised by this movie. The whole father with Alzheimer's was disconcerting at first, as if the movie makers thought we needed brought down at a certain point. I'm glad they didn't get too melodramatic with that. Oh, and why were they making fun of Train in that fake (and wonderful) movie AND THEN THEY PLAYED IT FOR REALZZ
(note:  THE FAKE MOVIE IS JASON SEGAL AND RASHIDA JONES, OH MY GOD)
Other things I enjoyed about this movie:
Woody Harrelson as a gay sports writer (a regretfully underused character IMO)
The use of the song "Closing Time"
Patricia Clarkson as a female version of my father
That kid from Modern Family calling JTim gay for liking Harry Potter so much
"Will you be my best friend?" FUCKING SWOON
me:  would you participate in a flash mob? I so fucking would.
Cara:  Emma Stone is our generation's Katharine Hepburn, MARK MY FUCKING WORDS.
Which is weird to say, actually, since multiple critics have remarked on how Mila and Justin channel Hepburn and Tracy in FWB.
But not to get off topic, though I totally am, I love and adore Emma Stone; I can't wait for The Help, even though I know it's going to suck ass. (note IT MIGHT NOT YOU PESSIMISTIC WHORE)
Father with Alzheimer's felt sliiiightly forced, and like Kurt said, you can kind of see the script writers hanging out, eating Chinese food and saying, 'We need a serious element...what can we do...cast Jenna Elfman, obviously...but what else?'  And then one writer slurps on his lo mein and goes, 'I GOT IT!  THIS IS EVEN BETTER THAN DHARMA!' and everyone else rolls their eyes because what could be better than Dharma?  Munch munch sweet and sour chicken.  Munch munch GRANDMA.
- How amazing do Mila Kunis's legs look in heels?  (HOTTTT)
- How awesome was it when Jamie smacked the douchebag's coffee right out of his hand?  I could picture myself doing that but it ending up on some power bitch's Louboutins and then me getting strangled with one hand while she texts on her blackberry with the other hand. (has happened)
- How believable is it that Andy Samberg, or anyone even closely resembling Andy Samberg (I'm looking at you, Jesse Eisenberg), would dump Mila Kunis because of big eyes? (eww Jesse Eisenberg)
- Surprisingly, Justin Timberlake's ass does nothing for me! (I'm in different)
- Woody Harrelson and Denis Leary are interchangeable for me. ( <3 )
- FOOTLOOSE THE REMAKE OMG HAHAHAHAHA LYLAS, JULIANNE HOUGH! (THAT will suck)
- This movie needed more sexting. (troof)
A- overall; very pleasantly surprised.  I'm going to start judging movies based on whether or not Mila Kunis is in them.