I am not overly excited about "The New Girl."

July 24, 2011
Even though I love Zooey and enjoy Fox shows, I'm not. I am simply not. Remember My Guys on TBS? ALMOST SAME PLOT? or how about this mid-90s gem 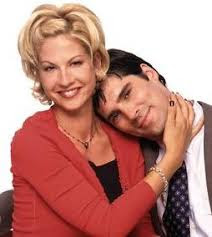 I bet you are thinking "what does Dharma and Greg have to do with anything!" but WHEN DOESN'T IT HAVE ANYTHING TO DO WITH EVERYTHING!


here's a synopsis of The New Girl, which kicks off on September 20 2011. Eww really? That's an ugly date. I'm sorry but it is. I don't like late September.


The show will star Zooey Deschanel as Jessica Day, a well-liked, bubbly, and adorable woman in her late 20's who is trying to get over her surprise breakup with her model boyfriend. She eventually finds a new place to stay when she moves in with three single guys; Nick, a bartender, Schmidt, a professional and modern-day casanova, and Coach, a former athlete turned trainer. Rounding out this unlikely bunch is Jessica's street-smart model friend Cece. Together, this group of friends try to help Jessica learn a lot about love, life and mostly about herself, while at the same time learn a lot about themselves.[2]
Aw, shucks, now I feel tingly. Maybe I should give this show the benefit of the doubt- perhaps it has the potential to be AWESOME. Parks and Recreation awesome! Or at least Friends awesome. But I feel like it's a case of "been there done there seen that had sex with it sniffed it mailed it to my parents they weren't impressed regifted it on Christmas."
I HOPE though for Zooey's sake, that I am wrong. At least the model is breaking form!
question:  will you watch? I don't even have a TV these days. YAY HULU