This Frontier DOES Need Heroes, after all! 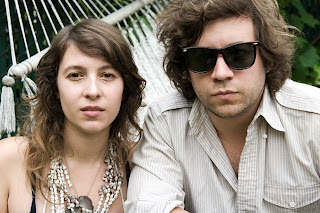 When NPR loves a band, you can rest assured it's probably a good thing. NPR is fickle with its love, after all. And they <3 this brother-sister duo from Brooklyn so much! In fact, you'd be hard-pressed to find (from those that know of them) any bad publicity about this alternative folk group. Since 2009, they have been nothing but well-received and have toured with the Handsome Family and the Tallest Man on Earth, among others!
In 2010, for their follow-up The Future, This Frontier Needs Heroes used fan donations to record, which I think is an interesting concept and shows how well-liked this band really is! I mean not all bands could do that kind of thing and have it work!
And, in an almost Bon Iver twist, they recorded The Future in an old school house in Wassaic, NY, with engineer Justin Pizzoferrato who has previously worked with the likes of Sonic Youth frontman Thurston Moore.
Here, I got to ask Brad Lauretti a few questions about the origin of their name, recording The Future and being in a working sibling relationship.
First things first- how did you pick your name?
Brad: This Frontier Needs Heroes was a progression from [my] Brad’s previous bands The Pony Express, The Mountain Men, and The Frontiersmen.  We wanted it to be unique, memorable and inspiring.  It is also a reference to Woody Guthrie’s guitar that said “This Machine Kills Fascists.”  It’s a call to action to Save the World. No one person can do that, so it take all heroes in all frontiers at all times!

What are you presently up to, at the moment?

Brad: We are playing shows around NYC and New England planning for our European tour in September. We are going to UK, Germany, France, Netherlands and Spain with our good friend Zachary Cale.  We are also recording a few new songs this summer while we are in Brooklyn, before we hit the road in the fall.


Your second album, which just came out (The Future, right) was funded by fan donations. Were you surprised by the help of your fanbase? What was that like? (I apologize if this seems like a lame question)

Brad: Yeah last year “The Future” was unknown!  We had toured the world for 2 years and had no money left.  One of our friends had raised some money with Kickstarter and so we thought that we could do it too.  When we finally hit the goal, we were in Austin for SXSW and I got pretty emotional because it meant we could make another album.  It’s safe to say this album wouldn’t exist without it.  Thanks everybody!

How do you come up with your songs? You have some pretty interesting themes going on...

Brad: I live life pretty spontaneously, and on the edge.  I also try to be aware of what is going on in the world.  I am a very curious person, I love to travel, and read history, politics, science and pretty much everything.  When I write a song, its something that I get preoccupied with until I sort it out, how to solve the problem.  There are a lot of problems in the world, and it can be overwhelming so there is plenty to write about.

Finally, I ask this as someone who has two of them:  what's it like being in a band with your sibling? I don't think my brother and I could ever be in a band together because I'd probably kill him.
Brad: We have a pretty strong working relationship.  We are both focused, and work really hard.  We both have our strengths that we bring to the band.  Although we have our disagreements for the most part we are on the same page, and when we aren’t it usually blows over quickly.

Facebook
Their Website
They will be playing a show August 12th at the Spotty Dog in Hudson, NY! If you're in the area, don't miss it! Thanks Brad!