August 25, 2011
Breaking News!
So I'm not sure why, but it seems that Libyan (kind of sort of former) leader Mummar Gaddafi (sp) was rather the big Condoleezza Rice fan. It turns out that after raiding his shack (or palace), a stash of photos featuring Condi Rice was discovered in a scrapbook. 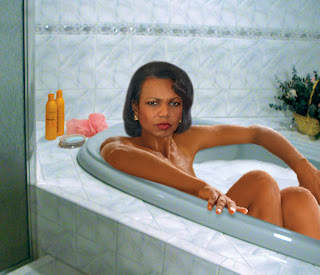 QATFYG:
Out of all the people in the world, why Condi Rice?
Gadaffi(sp) spoke some really poor English, but perhaps it was all a big joke so he could make winning lines such as......

I like my MEAT with some Condi*ments...particularly mayonnaise. BAM!
Crude People Will Inherit the Earth!

Moreover, someone made a comment earlier this week about photoshopping a picture of Anna Paquin's face on my body. I am now cool with that, but can we please do a bathtub pic? I'm inspiried.