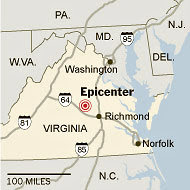 I. Girard, PA
My boss had just left the gallery in Girard a bit before 2 p.m., and I was drumming my fingers on the desk, staring at the computer screen and trying not to nod off. I felt this strange shaking - a tremble, really, and my hand shook on the desk. I looked to the glass display case to the side of me and it, too, was trembling. I looked up then, and saw that the walls and windows were vibrating. It only lasted about ten seconds, and since I'm kind of crazy, I thought it might be just me.
Then it occurred to me it might actually be something news-worthy. I mean, in Erie, when someone throws up outside of the Cellblock it's on the news.
I went to the yourerie.com website and LOOK AT THIS:
http://yourerie.com/fulltext/?nxd_id=188997

RED EARTHQUAKE GRAPHIC INDICATES FIERY SERIOUSNESS OF INCIDENT
--- Also, whoever does the online web editing for yourerie sucks major donkey balls at their job. They initially misspelled 'received' (it's been fixed); the article opens with 'A earthquake...'; and the author wrote most of the sentences in the passive voice. Come on.
Anyway, I felt really vindicated and spent the next half hour reading news stories and sharing my harrowing experience with anyone who would listen. That included Bryce and my boss, whom I promptly texted in order to brag about how I felt the shaking, knowing he probably hadn't. Even if he wasn't impressed at all, he pretended for my sake. :D Thanks, boss.
II.


Hi, you know it's BK because the font changed. MIND BLOWN. Okay, so there was this really big earthquake today that Cara apparently thought she felt. I don't know. Erie is on a major faultline and if there is a God in 2012 it should be swallowed up by said faultline.


at around 2, I decided to get out of work for a little bit. I sort of wanted to clear my mind and the resounding thought in my mind was FUCK THIS I WANT A MARATHON BAR


seriously, they have these in few places, the fact the Rite-Aid near me carries them is a Godsend. I don't really know what an energy bar is nor do I care. whatever I put in my body is fine unless it's arsenic. BEHOLD:

do I have a problem with these bars? IF HAVING A PROBLEM MEANS BEING AWESOME SO BE IT.


well, while I was waiting in line- Good GOD old Jewish women live up to every stereotype imaginable! - I noticed the cash register was shaking. Swaying, really.

to which my new thought was "what the hell, man."


so then I listened to Robyn and walked back to work whilst eating said bar (amazing). when I arrived at work, I learned there had been an earthquake. Did I believe it? HELL NO. Did I then realize the epicenter was in NoVa? Where my sister lives? MRMMRMRMRMR.


I love my sister as much as I love Gwen Stefani, Oh Land, and marathon bars, but in a different way. I possibly love my sister more than my parents. Of course I emailed her. Also, if you were wondering how a first-person reaction of what went down in New York during EARTHQUAKAKAKKAKALYPSE

she wrote me back to say that her car was crushed. of course I didn't think it was like- really crushed? you know? but um. here, this picture has become very popular with the national news: 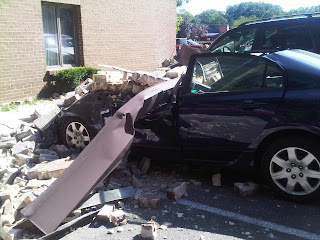 here's a video of her, she's standing on a corner scratching her head with her running shoes. also, I'd like to respond to the Youtube comment by ignorant-piece-of-shit that states "This is God's way of saying stop stealing from innocent people" or something equally moronic. My sister is a nice girl and you probably have AIDS for brains. I don't know how that would work, but wikihow it: you have that problem.

it was a really nice car. we had some good rides on it. it sat in my parents' driveway a lot. RIP car.


As for me, I guess it would have been more exciting to have been in Manhattan for this quake. because then people would have been panicking and stuff. and I would have panicked as a result. One day, I will work (full time) in Manhattan. My best friend has been visiting and he said a lot of people didn't even feel it. And then there were these people on the subway tonight who were like IN ALL MY FORTY YEARS I HASN'T FELTS EARTHQUAKES B4. oh wow.


in conclusion: I love Marathon bars, the Mayans were right, that picture above is Aztecs and oh I know it.


p.s. you should send my sister a dollAR so she can get a nice station wagon. Anderson Cooper, yes, I'm talking to you.