The OJ Simpsons: FOX Just Can't Get Off 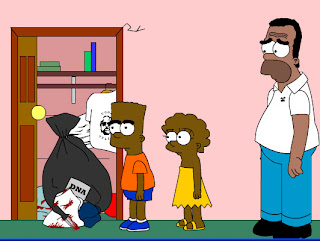 Guess what?
This is an idea that seems like it was just waiting to happen. Everyone made comments comparing Homer Simpson to OJ Simpson back in the day.
This series is not new, but what's new here is that FOX has tried and failed once again to get this spoof of “The Simpsons” taken off of Youtube and the internet. But as you can see below in the video, they are still here.
The guys with “The OJ Simpsons” even pay a special tribute to Rupert Murdoch and his constant attacks on the show in the fourth episode.

If you visit the youtube page for the comments section, you will see that it is about half the people like the show and the other half does not. I will say that my first impression was underwhelming. I say that because when I discovered this web show, I thought it would be a comedic goldmine. It just looked like it had so much dark and black humor potential (that is not a racist comment in the slightest). However, the jokes were not extraordinary, and in the first episode there is soooo much time where the characters are simply standing around. Still life is not for cartoons.

On another note, this show does have lines like…

OJ: Hey, it’s not easy being a single parent.
Son: Well, that was your choice dude.

Recruiter: Are you an American citizen?
OJ: Yes sir.
Recruiter: Can you kill?
OJ: That’s what they tell me.


I am writing this assuming people are familiar with the OJ Simpson background.
One comment on the video was..."Where's Marge?" I wrote back "Take a Fucking Guess!"