Someone Still Loves You, Boris Yeltsin!

August 19, 2011
This band was a band I originally started enjoying because of the name and the name alone. The music came second. But it's good music, nonetheless. I asked them a few questions recently, about the Russian politician they are named after, their upcoming new album AND the fact they have a song in what is bound to be a classic movie, Shark Night. Their new album, FOR YOUR INFORMATION, Tape Club, comes out October 18th.

Do you think people really still love Boris Yeltsin?
SSLYBY:  Not really. I'd like to meet one his grandchildren one day and ask them what he was like in real life.
How's your tour been so far?
SSLYBY:  Our last tour was in June. We played at some weddings for our friends. We've been bumming around in Springfield since then. (internet liez)
What's the most memorable concert-related experience you've ever had?
SSLYBY:  Our last show was pretty memorable because I completely forgot how to play the guitar. I seriously couldn't remember how to play a power chord. My friend Danny said it was the best show he's ever seen us play.
How often do you guys get to go back to Springfield? Also, have you ever heard of the Springfield Effect?
SSLYBY:  We're in Springfield most of the time because we average about 100 out of town shows a year. If the Springfield Effect involves UFO bases on Mars, yes, I've heard of it.
You have a song in "Shark Night!" Excited? Do you guys hold any cinematic aspirations?
SSLYBY:  Yeah, I'm really excited about it because I have no idea what it's going to be like. I have a pretty good guess, but I'm prepared to feel weird about it. My dream job is to edit movie trailers, so I guess I have some aspirations.
Andddd you have an album set for October! Any details you can divulge?
SSLYBY:  27 songs on 26 tracks. There are 7 new songs no one has ever heard before, so it's almost like a brand new album. (almost)
What are your parting words? (say anything, really)
SSLYBY:  I don't know what you've been told...it ain't the butterfly, it's the tootsie roll.
AMEN

question:  do you think Vlad Putin will get a band named after him?
more relevant pics: 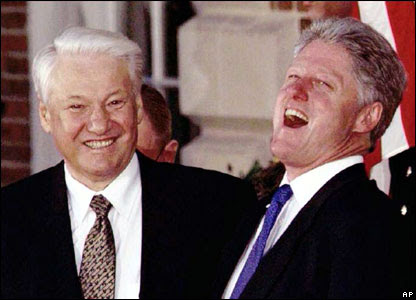