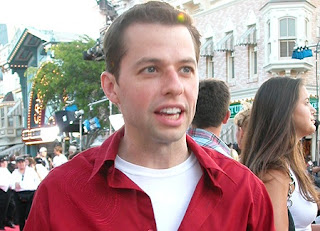 "What is left in a universe without Sheen?"

The post-Sheen era of The 2.5 begins with a funeral bereft of expression of grief. In a show like this, it's expected. Unfortunately, the multitude of jokes about sexually transmitted diseases and hating Charlie flop like Leno talking Lewinski in 2011. It is disappointing and seems slapped together, without the writers' usual cleverness, blunt, with no phrases humorously flipped.

After this scene, I committed suicide, so I am unable to comment further from personal experience. However, at my funeral, I overheard some coffin talk that detailed the rest. I should warn you, should this be accurate, it might spoil the show, which already aired this week and may not air again in the forseeable future:

The funniest scene in the entire show is Jon Cryer being startled and throwing the contents of an urn all over the floor. Yes, this is the best scene in the most-watched episode of the series, ever.

Ashton Kutcher is competent but really not given any funny material that I can recall. He routinely refers to having a lot of money and a large penis, and is inexplicably nude throughout most of the episode, much to the delight of the other characters.

Staple characters, such as the mom, the kid, the maid, the ex-wife, the crazy girl and the guy from the Drew Carey show fall flat and are given no good lines.

Oh, and they leave the door open to bring Sheen back.

Tune in later for my treatise on how Johnny Galecki deserves the Emmy over Jim Parsons.