September 23, 2011
Caution!  Spoilers alert!!! - Ursula
I love this time of year, partly due to the cooler weather and appearance of sweaters and boots in the shop windows but mostly because ALL MY SHOWS come back.  Thursday night on NBC has been an evening of bliss for me and many of my friends for a couple of years now.  This Thursday was no different.  I couldn’t wait.
Oh, except obviously it was different, what with Steve Carrell having finished his career on The Office at the end of the 7th season.  And we got to find out who was replacing him.  Not replacing him like actually getting an actor to replace Steve (this ain’t no Ashton Kutcher = Charlie Sheen), but replacing him as in finding out who’d be the new boss. 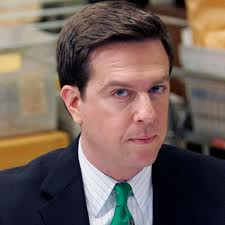 Andy Bernard.
And I was like…whaaaaaaaat?
I didn’t particularly love any of the candidates from the end of last season.  Did anyone?  They were all either nuts or just blah.  Except maybe for Robert California (played by that guy everyone but me seems to recognize from some other show), but of course the twist ending was that he became Sabre’s CEO instead of the regional manager.
And…Andy?  Out of everyone else…Andy???
I was a little disappointed.  But I shook it off and enjoyed the episode, which was not the series’ best but definitely wasn’t its worst.  Pam is pregnant again (they pretty much had to write that in given Jenna Fischer’s real-life bun in the oven).  Angela is also pregnant to her secretly gay state senator husband.  Dwight is as jealous and conniving as always.  Stanley has come to life; he’s actually being really cute, I think.  And GABE IS STILL THERE, for reasons I can’t figure out.  MAKE HIM GO AWAY.
Andy has always been the wing man.  He has bad luck in a lot of areas and he doesn’t make much of an impression, other than being quirkily, awkwardly hilarious.  So he was never really a contender in my book, and he probably wasn’t in yours, either.
The thing is, Andy really pulls through for his subordinates at the end of the episode.  And I think that it was written really well for the sake of the show and for the sake of our reactions to it.  NOBODY could possibly feel confident or excited about Andy as Regional Manager…until the end, when he proved his worth.
So, The Office didn’t suck last night!  This makes me so happy.  Last season was weak, we all have to accept it, but with this season premiere I think that maybe everything is going to be okay.
Here’s a quick rundown of the rest of Thursday night on NBC:
Community.  Good, solid, getting better all the time.  I didn’t really follow this series until, like, last spring, but it has a lot more to give and I’m going to make more of an effort to watch it.
Parks and Recreation.  Last night’s episode had me nearly in bittersweet tears.  Oh my goodness.  How is it possible that such a hilarious show can be so sweet and sincere at the same time?  P & R just makes you feel good about the world. <- omg yes!!!!!!!!!!!
Whitney.  Ugh.  How are sitcoms still relevant?  I can’t wait for this show to die and for 30Rock to COME BACK ALREADY.  Besides, I don’t get the premise of this show.  A loud, kooky lady and her non-personality boyfriend are…what?  What are they doing?  Why are we watching?
Prime Suspect.  Another day, another homicide detective.  Again: BRING BACK 30 ROCK.