September 06, 2011
Look Below for the Largest Piece of Halloween Propaganda at my local video stores. 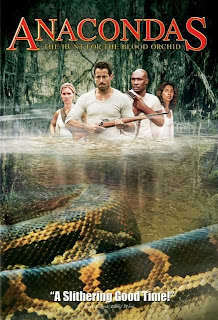 Yesterday, while I was pretending to be interested in renting movies from my nearest video store, I happened to notice they have set up their display for this Season of Halloween Horror-filled films.

Indeed, the largest pieces of their display are the poster and cases of "Anacondas: The Hunt for the Blood Orchid."

For the Halloween Season, the spookiest choice they could muster up was a movie about a big scary snake....giggle giggle giggle.

They chose the Anaconda Franchise over Michael Myers in "Halloween" and even over "Earnest Scared Stupid!" WTF You Denigrating Bastards?

Strange Tastes in the Spooky.

In case you are wondering, I live in Alaska, and movie rentals are not a dying breed at all. There are as many video stores here as there are fast food hubs. In all seriousness, there is a rather charming "Video City" across from the Muldoon Trailer Park, and they are presently hiring. They only pay minimum wage, but free rentals are included......and yes, they sell porn......unless those X X Xs on top of their sign are lies three times over.
My question to you: if that is across from a trailer park, how has that position not yet been filled?

I saw "Anaconda 1" about 13 times over the course of one weekend. I rented it, and I just kept watching it on repeat. No matter how many times I saw that one, Ice Cube just wouldn't die. It made no sense.